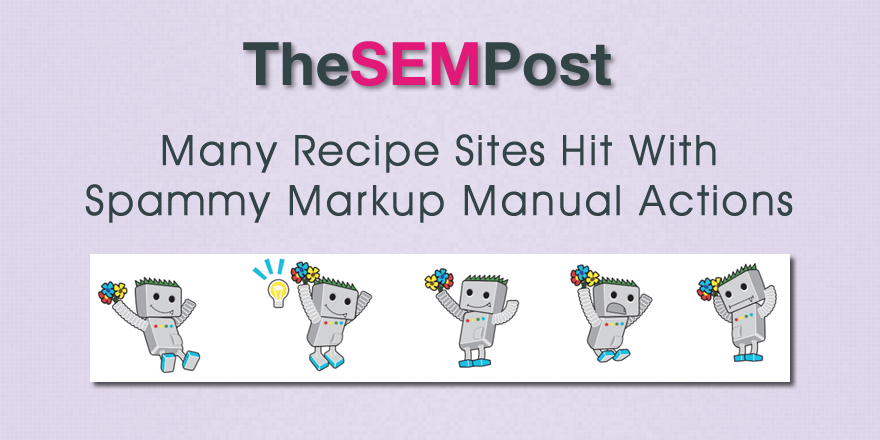 Do you own a recipe site and received a spammy rich snippet manual action on your site in the past week?  If so, it is likely a specific recipe plugin that is at fault for spammily marking up recipe pages.

The Google Help Forums have multiple recipe site owners asking for help after receiving this manual action.  And once again, the ratings/reviews is the reason behind the manual action.  It seems EasyRecipe is the biggest culprit that is triggering these manual actions this time around due to the spammy way it marks up recipe sites.

The main issue is the fact that EasyRecipe is marking up reviews/ratings when they aren’t visible to the user when visiting the page, which was the same issue behind the many manual actions Google sent out in February to recipe site owners.  This is something you can turn off in the plugin, but it comes enabled when you install it, and many recipe site owners aren’t aware that this will trigger a manual spam action by Google.

And while there could be some new sites hit using a plugin other than EasyRecipe, EasyRecipe seems to be the only recipe plugin that hasn’t updated to meet Google’s new rich snippet guidelines for recipe sites.

It also highlights why it is important to investigate any WordPress plugins before installing them on an important site.  For anyone looking at EasyRecipe, it shows no support threads answered in the last two months and numerous complaints about lack of support, even for paid users, not to mention all the threads related to the previous round of recipe site rich snippet spam Google did in February.

It is worth noting that the rich snippet errors report does not report on spam issues, merely if the rich snippets are technically correct.  So you can show no errors in your rich snippets, yet still get hit with a manual action.  Or you could show errors unrelated to the spam issue, which also causes confusion by recipe site owners trying to fix those issues to get their manual action lifted.

If you use any of the other recipe plugins, be sure to update it to the latest version, since most of the plugins have been changed to prevent this issue.  As always, you want to make sure any plugin you use has been regularly updated – it is often outdated plugins (or site owners refusing to upgrade from older versions) that cause sites to be compromised.

We finally have the first Google Quality Rater Guidelines update of 2022, and like usual, it is … END_OF_DOCUMENT_TOKEN_TO_BE_REPLACED