You are here: Home / State of the Industry / Is Lord Sugar Legitimizing Everything Wrong in the SEO Industry?

SEO Whoa.
SEO has for most, if not all, of its existence faced a trust and integrity issue. SEO faces this issue not because the genuine practitioners of SEO are untrustworthy. However, with a low bar to entry and the ability for anyone to say they know what they are doing ‘hangeroners’ come with the territory. We know this, accept it and do our best to educate clients on what SEO (on digital marketing) really involves and some listen, some don’t. Often however, it can take a rough encounter with a penalty or two for some to get it, but eventually they all figure it out.

Low Bar to Entry.
Unfortunately, the low bar to entry really cannot be helped. With hundreds of major changes to the algorithm every year and thousands of minor ones there is no certification test that would be valid the day after it was published. As for other types of controls people have suggested, like a Code of Ethics, this would do nothing to stop the Snake Oil Salesmen and everything to cause great division in an industry that relies on getting along to succeed. 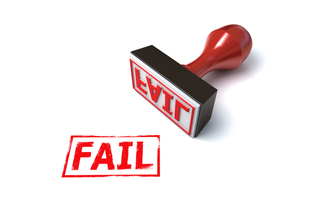 Fortunately though if a company does its due diligence they realize pretty quickly they cannot get a successful marketing services for cheap or free. When you pay for SEO you are paying for a knowledge base, not just a service. So when you apply common sense the Snake Oil Salesmen becomes readily apparent. A field that requires so much expertise would not have cheap service practitioners unless those practitioners are either cutting corners or have little to no idea what they are doing.

If you are unsure, one of the quickest ways to know is to do a quick check on whom they know? Who are they connected to and who do you see them exchange communications with in public spaces. Snake Oil Salesmen, they tend to swim alone.

Well that was until recently. Two recent incidents elevated this issue to new prominence. The first is a US based situation where the very esteemed “Moz” wound up legitimizing a rather disingenuous gentleman with their Whiteboard Fridays. Throwing out unproven theories, attacking those who requested information and proof then calling people doing legitimate work Snake Oil Salesmen, Moz gave credibility to the very type of “SEO” we are challenged with explaining away every day. However, this is nothing compared to the issue those in the UK now face, with The Apprentice winner Mark E. Wright. 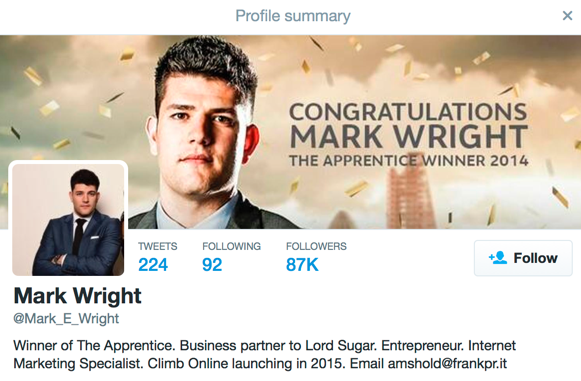 A Lord Named Sugar.
For those stateside, The Apprentice UK winner Mark E. Wright was awarded the job and £250k for his “newly minted idea” for an outsourcing Online Marketing Agency. His USP (Unique Service Proposition)? Setting up Small Businesses with assigned Project Managers and Consultants at the grand price of £400 a month*. And therein lies a potentially enormous problem for the SEO industry in Europe and possibly across the Globe.  In one fell swoop Lord Sugar (the UK version of Donald Trump) legitimized everything that is wrong with our industry.

Our SEO product is unbelievable….!! It will change the way SEO is done in the UK. White Hat, ethical techniques that get page 1 results.

Mark’s Climb Online.
During the finale of The Apprentice Mark was asked how he intended to execute his business plan. He first suggested outsourcing and then potentially SEOs in-house that he would be paid around £20k-25k a year. He then states his price point would be £400 a month and for this the client would get concierge level service. Not only were they going to get hands on one-on-one service, but also they were going to “change the way SEO is done in the UK”. The issue is there is nothing to suggest Mark has any real experience with SEO other than a stint as a sales agent for one company that lasted less than two years. There is also no reason to believe he has hit on some magic SEO methodology that will allow him to perform these services for the suggested rate and in the show he offered up methodologies that are likely to get your site in hot water with Google or the algorithm.

In addition to this very sketchy plan of outsourcing poor SEO which in the SEO community generally indicates less than specialized services at best and spam at worst, all indications post show are that the company is being set up as a shell call center with little understanding of Digital Marketing, if their own efforts are any indicator.

Climb Online?
If the launch of the agency is any indicator of Mark’s own understanding of how Digital Marketing works his potential clients may want to wait to see the success of others before investing their money.

Disclaimer: Until Mark does launch the website we cannot be sure he won’t get some intermediary advice and change course, however at this writing that does not appear to be the case.

So what do we know about Mark from the launch of Climb Online?
Well just to start Mark never checked that his site name was available when he named his company. The name ClimbOnline.com is already taken by a rock climbing site and they are not looking to sell, so Mark was left with Climb-Online for his moniker and as anyone in SEO knows this is a much less desirable site name than the combined.

So let’s look past the fact that he never checked the domain name for availability. What about the site itself?

Where is Climb-Online?
The domain Climb-Online.co.uk was registered in June by Lord Sugar’s holding company (no other contestant’s names were), which shows that they knew the outcome of the contest well before the December airdate. Yet as of today, January 12th 2015, 7 days past the official launch date and seven months past the registration date Climb-Online.co.uk has no site. It has a badly coded holding page (uses tables) with no lead capture that doesn’t use SEO in the title tag, but no site. When asked about the site Climb-Online mentions its holding page. Ok, so far not off to the best of starts. (For more information on the website issues, read Dan Barker’s The Apprentice: 5 Basic Digital Marketing Errors from @Lord_Sugar’s New Company and Ghost Marketing’s Climb Online – The Apprentice My Rant). 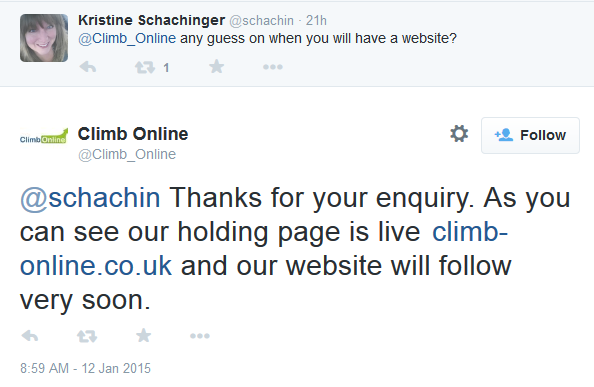 No site, bad domain, and missed the launch by a week (at writing) wasting many link and traffic opportunities. Even someone in SEO 101 would know each one of these are big misses, together they show a certain lack of understanding typically reserved for those NOT in the business.

We also know that Mark only registered his Twitter page last month and though he personally has many followers due to the show his actual company is not faring as well. 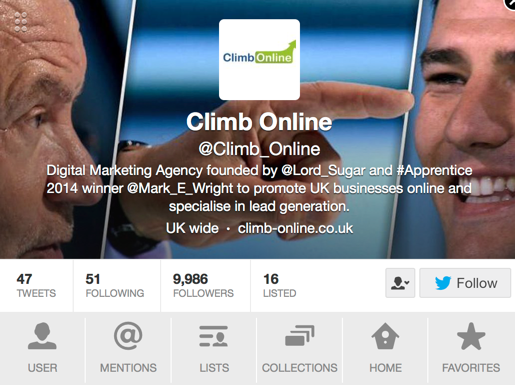 In comes the POO!
As many close-knit communities can be, SEOs are protective over the integrity of SEO. Much of SEO relies on peer review more often reserved for academic environments. With the sheer exposure this agency and site has received there is the potential for clients to think this is how SEO is done further sullying the reputation of the legitimate persons who do the work and do it very well.

What’s the POO?
“#POO” is a satirical term meaning Pecking Order Optimization made popular by Mark’s Twitter Parody Doppelganger “Mark Always Wright” @SEOWithSugar. (Sugar referring to Lord Sugar not the unparalleled Sugar Rae (a legend in her own right)) If you are not already following this account, I suggest it for the humor factor alone.

#POO and @SEOWithSugar are using humor to highlight what is a real and some might say, very serious issue for the SEO community. But why all the concern?

The Danger.
The sad truth behind this effort is it appears no thought has been given to how this might impact the many who already do business. Lord Sugar and Mark Wright appear to have seen dollar (or really pound) signs behind a call center lead generator where experience and expertise are seemingly add-ons.

Yet, Mark Wright and Climb Online are receiving the type of exposure that few SEO agencies or individuals will ever hope to receive in their lifetimes. With this type of exposure is inferred a responsibility to effectively and properly represent that industry. However as we have seen, the company appears to have little understanding of even the most basic SEO premises. A little uncharacteristic for a company that is going to “Change the way search is done in the UK”.

Now SEOs are reasonable people. If the site comes out, the propositions are reasonable and the company appears to be seeking out expert advice while offering proper services the @SEOWithSugar account will likely fade into the background and the SEOs currently en garde will step back and move on. However, if Climb-Online continues on this path they might find they wished they moved into an industry that does not care as much about itself as this one.

We finally have the first Google Quality Rater Guidelines update of 2022, and like usual, it is … END_OF_DOCUMENT_TOKEN_TO_BE_REPLACED