You are here: Home / Google / Google: Marking Up With Both JSON-LD & Microdata Not a Risk 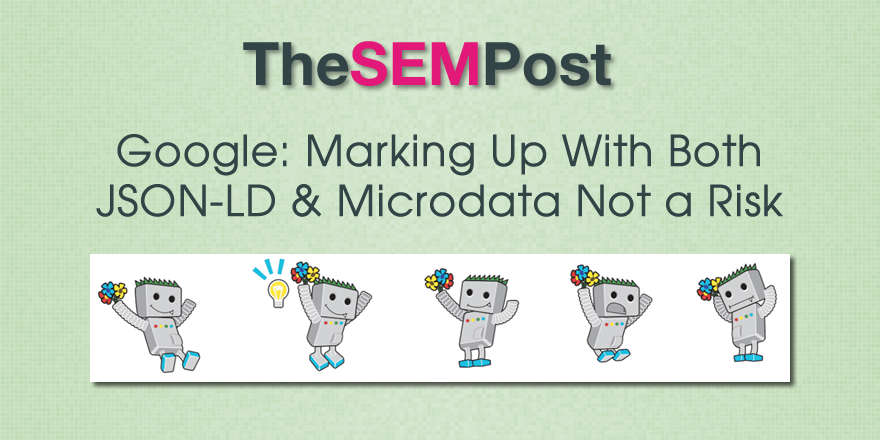 Most site owners have a preferred markup type when it comes to structured data, or perhaps it is because a favorite plugin that offers easy markup implementation only offers it in one format.  But what about if you have need to use multiple schema types on the same page to support different services that require different types of schema?

Could this result in Google removing all rich snippets from the site with a manual action for spammy structured markup?  Or if the content is the same, does Google not have any issues with it?

I asked Gary Illyes from Google about these types of situations and he confirmed there is no risk of a spammy structured data markup manual action by marking up the same content with two different schema formats.

@jenstar no, that shouldn't be a problem

At issue is Google’s preference now for JSON-LD for marking up structured data – not to mention many developers prefer using JSON-LD for markup as well.  But some other third party services, most notably Pinterest’s rich pins which only use microdata, left many concerned that they could risk a manual action for two types of markup.  Multiple recipe plugins only offer an “either or” option when it comes to schema, without allowing a site to use both, citing manual actions.

So if you want to support multiple schema types on a single page, then marking up the same content multiple ways – such as both JSON-LD and microdata – will run no risk of an issue with Google.

However, if you use it in a spammy way – such as marking up your real content, such as a recipe, one way, while marking it up for “buy viagra in a Canadian casino” in the second format, then you could still run the risk of a spammy structured data markup manual action from Google which would see the site lose all rich snippets in the search results.

We finally have the first Google Quality Rater Guidelines update of 2022, and like usual, it is … END_OF_DOCUMENT_TOKEN_TO_BE_REPLACED