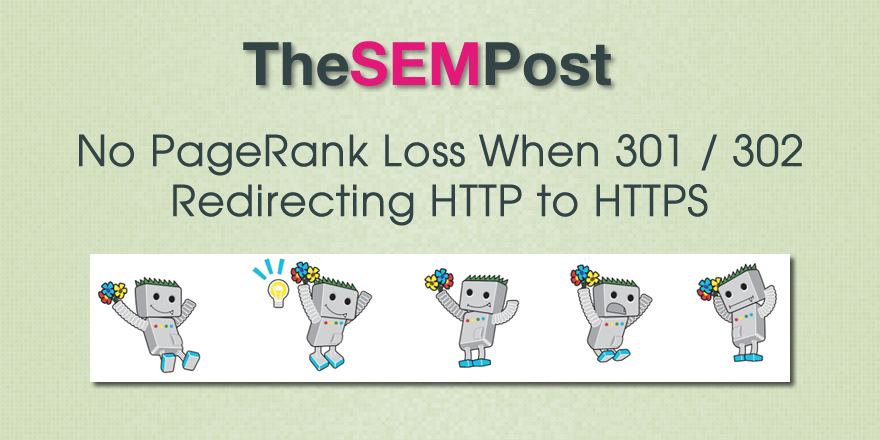 One of the concerns that people have had over switching to HTTPS is whether there would be any PageRank loss, even a small amount, by redirecting all pages from the HTTP version to the HTTPS version.  After all, no one wants to make the switch for the tiny ranking boost (which acts as more of a tie breaker) when they could potentially lose more through the loss of those link values from the redirect.

John Mueller posted some HTTPS Q&A and he specifically brings up the PageRank loss concern, and he confirms that there is no PageRank or “link juice” loss for redirecting to HTTPS.

# Do I lose “link juice” from the redirects?

Note this is only for 301 or 302 redirects.  While you could do a meta tag redirect, which you still see sometimes when there isn’t easy access to the .htaccess file, there is the possibility of losing some of the link value.  However, since switching to HTTPS is pretty technical, I would be surprised to see anyone using the meta redirect.

There had been some confusion about loss of PageRank due to this Matt Cutts video regarding PageRank loss via 301 redirect, although the video more implies offsite redirects.  But this video was also before the massive Google push to HTTPS and the announced ranking boost that went along with it.  So it does make sense that Google would want to incentivize moving to HTTPS by not seeing any PageRank loss for a straight HTTP to HTTPS 301 or 302 redirect on the same domain.

Is this a special case scenario just for HTTP to HTTPS?  It isn’t clear, and Google doesn’t make many comments specific to PageRank these days since the metric for the publicly available PageRank is years out of date.  But also, because PageRank being so far out of date, when you do switch to HTTPs, your toolbar PageRank won’t follow… unless we happen to see another (very unlikely) PR update.  Don’t forget though that Google still maintains and updates an internal PageRank metric, we just haven’t seen any changes to what SEOs publicly see for PageRank in years.

That said, potential PageRank loss is one of the things that SEOs do cite as a reason to not switch, so having no PageRank loss due to a switch from HTTP to HTTPS makes a lot of sense, since people still are obsessed with their PageRank.

Mueller also posted this in response to all the focus by SEOs on the PageRank comments.

Spend days writing & cross-checking a FAQ on HTTPS, and the main topic of comments is PageRank. pic.twitter.com/ySepYhqnM8

We finally have the first Google Quality Rater Guidelines update of 2022, and like usual, it is … END_OF_DOCUMENT_TOKEN_TO_BE_REPLACED