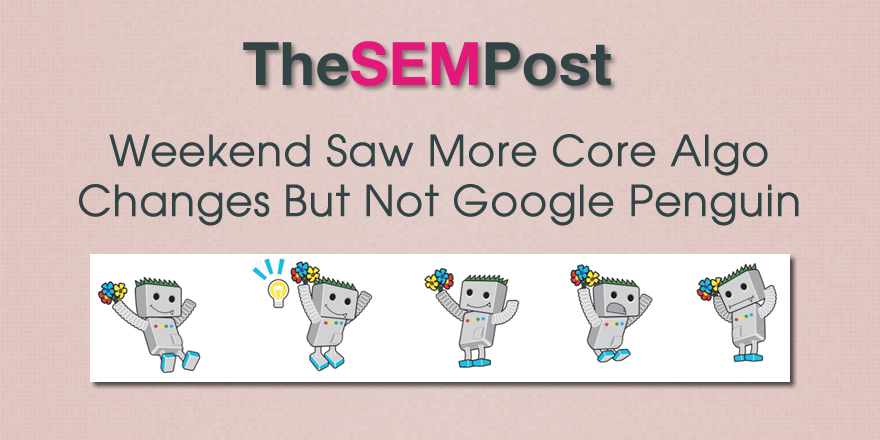 Once again, the SEO community was abuzz over some major fluctuations that the “weather report” tools that monitor Google’s search result fluctuations.  High temperatures were seen over the weekend, but we know two things.  First, it was not Penguin related, and second, it was a core algo update.

This is the second significant core algo update we have seen recently.

Both Gary Illyes and John Mueller commented over the weekend that it didn’t seem Penguin related, despite many people claiming it was (again).  But back at work today, Gary Illyes from Google confirmed both that it was not Penguin, and that it was a core algo update – one of the 500-600 updates that Google makes to the core algorithm each year.

While we don’t know more about what signals may have been updated, since Google seldom ever comments on the many core algo changes, there had been some rough analysis over the weekend that saw mobile seeing much more in the way of search result changes.

There was also some ponderings over the type of sites, but since only the top ten sites were tracked, it is often difficult to tanslate only knowing the top ten into anything useful.  This is because we don’t know what else might have affected those sites, such as technical issues, URL changes, manual actions, etc.  Here are some findings from Tony Dimmock.

But again, because we don’t know what might have happened “behind the scenes” so to speak with any site in these top ten lists, take it with a very large dose of salt.

We will likely see some more analysis being done over the next few days as well.  And we are still waiting for the real time Penguin to launch.

Google has released a new version of the Google quality rater guidelines, a year after the last … END_OF_DOCUMENT_TOKEN_TO_BE_REPLACED