You are here: Home / Google / Not Panda: Recent Search Changes Are Core Algo But Not Panda 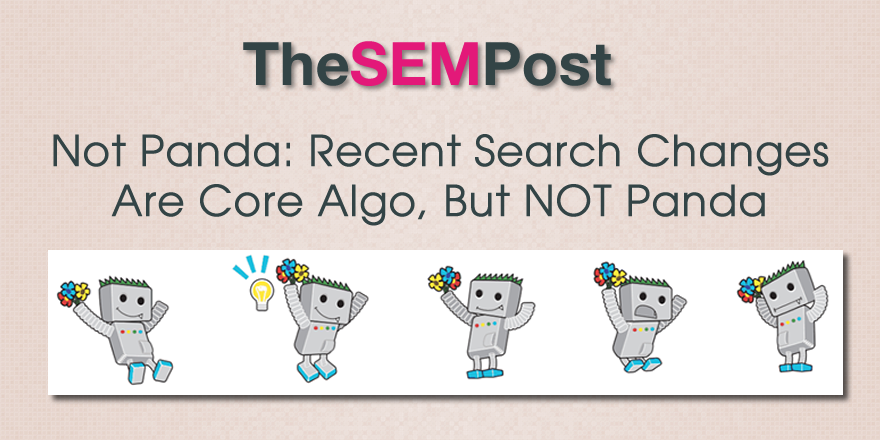 Google confirmed on Tuesday that the recent changes in the search results that webmasters have noticed since late last week are not Penguin related.  So then the next assumption many made was that it must be Panda.

While Google had previously confirmed the changes were Core related, many wondered if that meant it had to be Panda.  But Gary Illyes from Google confirmed that while the changes are Core – and Panda is now part of that Core – that these specific fluctuations we have been seeing are NOT Panda.

@jenstar correct. The recent ranking fluctuations you noticed have absolutely nothing to do with panda or other animals

He also confirmed that while Panda is now part of the Core, they haven’t updated the Panda part.  There had been some confusion with some assuming that Panda being part of the core algo meant it was also real time, but that is not true.

@jenstar to be clear, panda IS part of the core algo, but we haven't updated the panda part. Not other animals.

Note: He explained immediately after this tweet (and blamed fat fingers) that Not = Nor

So yes, there are definitely some changes in the search results going on, but they are part of the standard core changes we notice from time to time, but are actually happening on a near-daily basis.

The good news is that now everyone can analyze the changes they are seeing in the search results from a non-Panda, non-Penguin perspective.

We finally have the first Google Quality Rater Guidelines update of 2022, and like usual, it is … END_OF_DOCUMENT_TOKEN_TO_BE_REPLACED