You are here: Home / Google / Penguin Possibly Next Week, Too Late to Disavow Links for Update 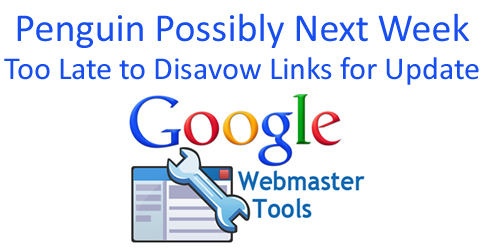 Penguin update is “weeks away” according to Gary Illyes, a Google Webmaster Trends Analyst.   Illyes was speaking on the “Meet the SEOs and Search Engines” at SMX East today.

Illyes said he talked to the search quality group about this a couple weeks ago, and was told it was “weeks away”, which means we could see the new Penguin update next week.  There was plenty of speculation we might see it either this week during SMX East or next week during Pubcon.

Illyes also said that it is too late to disavow links to deal with Penguin issues, and it was too late as of two weeks ago. So if you have disavowed something within the last two weeks, it won’t have any affect on the next Penguin update.

Illyes feels that webmasters are going to be pretty happy about the change – there was much speculation that there might have either been too many false positives or an issue with too many sites sneaking through and that was why the update has been such a long wait.

They also plan to make changes so that Penguin can be updated much more frequently, so there isn’t such a long wait next time.  They are doing the same thing for Panda.

Webmasters have been waiting for a year now for the next Penguin update, so news that it is “weeks away” and possibly next week is very good news, especially since many have been in Google purgatory since then.

We finally have the first Google Quality Rater Guidelines update of 2022, and like usual, it is … END_OF_DOCUMENT_TOKEN_TO_BE_REPLACED