You are here: Home / Google / Why SEOs Should Focus on Google’s Other Algo Signals, Not Just Panda & Penguin 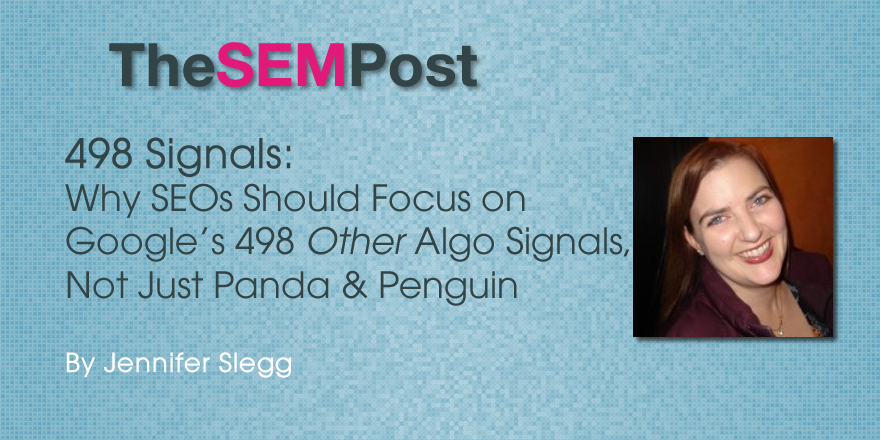 If you have ever been hit by a flying Panda or Penguin, it can have a pretty devastating effect. And by far, the most Google algo attention is given to Panda and Penguin, with the only possible exception of the month leading up to the mobile friendly algo launch date in April… although the terror-inspiring name Mobilegeddon probably helped that along quite a bit.  But SEOs should really think about giving attention to something else… and no, it is not black and white.

It seems more and more that the moment people see a site go up or down in Google referrals in Google Analytics, even ever so slightly, or spot Mozcast having a beach party when it hits 80s and 90s, people jump to the conclusion that it has to be either Panda or Penguin.  Then of course, the very next thing they do is start tweeting, posting and blogging about it.

But they ignore one crucial piece of the algo puzzle… the fact there are over 500 other changes Google makes to the algo each year, so odds are extremely high it has absolutely nothing to do with a black and white animal in any way, shape or form, but more something to do with all those other signals that aren’t ironically named after a cute animal.

Most sites aren’t impacted by either Penguin or Panda. Yes, it is still the vocal minority who are impacted, but they can be awfully loud when it comes to the injustice of Penguin taking a year to update (which granted, pretty much every SEO agrees with, except perhaps those few who rose to the top in an industry where it seems nearly everyone else seems to have been slapped by one or the other).

But what about those big scary % of searches affected?

While Google often says the percentage of search queries that a Penguin or Panda update affects, it doesn’t actually translate to the same percent of overall websites that are affected.  Why is this?  Because often competitive and high traffic search results tend to have more sites all completing for those top spots, and many of them are willing to push the envelope a little bit more than what someone in a less competitive area might do.  And throw in the number of “burn and churn” spam sites in those highly competitive areas and you have an abnormally higher % of queries that do have sites affected by one or the other.

For those that have worn the characters off your F5 key while religiously checking the search results for big money keywords, it can be just one of these 498 signals that changes or updates that makes you go from being one position ahead of your main competitor to one position below them, or hopefully, vice versa.

As long as you aren’t doing anything that could see your sites impacted by Penguin or Panda (and of course, periodic backlink checks for safety are always prudent, so you can fix a potential issue before another round of punishment, er, I mean Penguin is unleashed), the real money is in those other 498 signals, the ones Google doesn’t really talk about because those are the real secret sauce signals, not Panda or Penguin.

The sky is falling… again today?

Yet, it is “OMG it’s Panda!” or “OMG it’s Penguin!” that gets all the attention.  And yes, sometimes in my head I think of Chicken Little running around proclaiming “the sky is falling!” to anyone who will listen, until nobody will listen.

However, the real money isn’t in rumors of falling skies, it is in “Hmmm, looks like Google might have given slightly gave a bit more weight to XYZ in the last few days” and those changes are what webmasters should really be paying attention to and not the usually false Panda/Penguin rumors.

This algo change is probably…

One just has to simply look at the Moz list of algo updates to see that most of the noticeable changes and fluctuations have nothing to do with a Panda or a Penguin. That is an abundance of algo updates that to do with something else – one of those 498 other signals, yet very little attention is given to them, while everything is Panda, Panda, Panda, Penguin, Penguin, Penguin.  But Panda and Penguin are just two parts of the 500, which makes it pretty teeny in the grand scheme of the Google algo.

Now, if you are actually impacted by Panda or Penguin, or you have a sneaking suspicion you could be in the future, then yes, you will be laser focused on one of those two algos and speculate what that 2 degree rise on Mozcast really means and inevitably post your own variation of “the sky is falling with pandas and penguins!”

But if you are the vast majority not impacted by Penguin or Panda and you have great content and great backlinks, focus on what you can change to position yourself better in the search results. Maybe it is dropping an ad below the fold, ensuring duplicate content isn’t an issue, ensuring mobile-friendliness is actually working across your site etc etc. Test those things and see how rankings change, because the reality is there is very little testing you can do with Panda or Penguin – and those are two algos that Google is pretty transparent about.

But why aren’t more SEOs even considering look at those OTHER 498 signals and changes that Google makes each year, because odds are pretty good that a pretty large chunk of those are impacting you or your competitors.  And you know what else?  With those changes, you usually aren’t stuck waiting around for months on end to see the benefits of those changes and improvements.

The March of the Penguins… and Pandas too

Now, sure, definitely keep an eye on when Panda or Penguin is happening… after all, you probably have some competitors that you are waiting (praying) for the update so they can get their traffic back, or are hoping they don’t get caught because of whatever nefarious SEO tactics they have been up to.  But spend less time on worrying about whether a slight bump or drop is Panda or Penguin, and instead look at those other 498 factors that could be impacting those non- black and white animal updates because that is where the real money is for the vast majority of sites.

498 signals gives you a lot to work with and a lot of things to test – although technically it is more than 498 out.  For many, even coming up with a list of 50 possible algo signals would be pretty difficult.  And over the years, Google has told us outright or heavily hinted at a good chunk of them… and if you are smart, you have kept a list of them 🙂

Not everything is coming up Pandas and Penguins


As much as you might be dreaming of a Penguin or Panda update, put your time and energy into things you can control… and start thinking about how you can make all those other unnamed updates work to your advantage.

Okay, but when is the next Penguin and/or Panda update?

Well, reality is we are due for one… but then again, one might not come for months, if Google algo history is going to repeat itself.

However, due to Murphy’s law, one or the other will probably make an appearance this weekend 🙂

Added: A few people have pointed out it is actually 500+ improvements/changes per year, but 200 signals.  But the intent is still the same… worry about those other signals and less with such a laser focus on Panda and Penguin 🙂

We finally have the first Google Quality Rater Guidelines update of 2022, and like usual, it is … END_OF_DOCUMENT_TOKEN_TO_BE_REPLACED