You are here: Home / Google / Structured Markup Does Not Affect Google Search Rankings 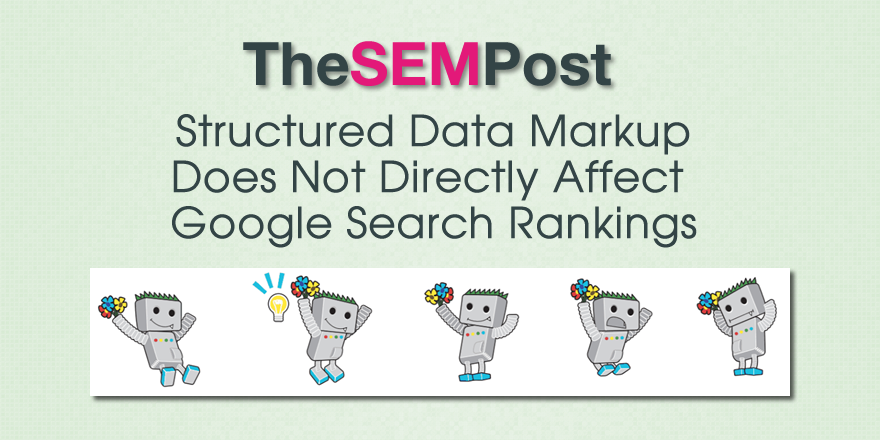 The question came up in today’s Google Webmaster Office Hours about how Google handles sites that use structured markup versus those that don’t, and whether sites that use it get any kind of extra ranking boost when it comes to Google’s search results.

Google’s John Mueller confirms that they do not consider the use of structured data – or lack thereof – does not have any impact on Google’s rankings at all.

So in general, using structured data markup doesn’t directly affect your site’s ranking, so if you add this markup to your pages, and that’s something that kind of helps us to better understand your page’s content, but it’s not something that will see any drastic changes in rankings in the search results.

So just because you’re marking up the content using structured data and your competitors aren’t doesn’t necessarily mean they’re ranking regardless of your structured data markup.

So I think that’s something where you shouldn’t assume that adding structured data markup to a page will significantly change its ranking, but rather I would do this to help us to better understand the content on your page, and of course to make sure that we can pick up things that we could use for rich snippets, because while rich snippets also aren’t a ranking factor, they do make the search result a little bit more interesting and they might attract more people to click on your site, even if it’s not ranking first.

That said, structured markup has many benefits.  It can enhance your search results depending on the type of markup you use, increasing CTR.  And we also see some markup show up in the rich snippets as well, as Mueller mentions.

But probably even more important, structured markup also can help Google understand the content on a page better, which could indirectly help Google rank a page for specific search terms.  But having structured data alone won’t have a direct benefit to the search rankings when compared to competitors who aren’t.

This isn’t exactly new news, but the use of structured markup has been rapidly increasing, both in the number of sites using it as well as the types of markup Google supports.  Google has also said previously that they do not use it for rankings in an old support page (archive.org link).

Google doesn’t use markup for ranking purposes at this time—but rich snippets can make your web pages appear more prominently in search results, so you may see an increase in traffic.

Google has released a new version of the Google quality rater guidelines, a year after the last … END_OF_DOCUMENT_TOKEN_TO_BE_REPLACED