You are here: Home / Twitter / Twitpic Shutting Down Once Again

A month after Twitpic first announced it was closing due to a trademark issue, then announcing it had been acquired, Twitpic has once again announced that they will be shutting down.

Twitpic, the first service for Twitter users that made it easy to upload photos for tweets, announced it was shutting down at the beginning of September after a trademark dispute with Twitter meant they could lose their API access.  Later in September Twitpic announced they were being acquired by a mysterious company and would no longer be shutting down.  However, it now seems that acquisition will not be happening.

They have now posted an update to their original blog post stating that they will indeed be shutting down.

UPDATE: It’s with a heavy heart that I announce again that Twitpic will be shutting down on October 25th. We worked through a handful of potential acquirers and exhausted all potential options. We were almost certain we had found a new home for Twitpic (hence our previous tweet), but agreeable terms could not be met. Normally we wouldn’t announce something like that prematurely but we were hoping to let our users know as soon as possible that Twitpic was living on.

I’m sincerely sorry (and embarrassed) for the circumstances leading up to this, from our initial shutdown announcement to an acquisition false alarm.

Users will have just over a week to download any images before the service shuts down permanently. 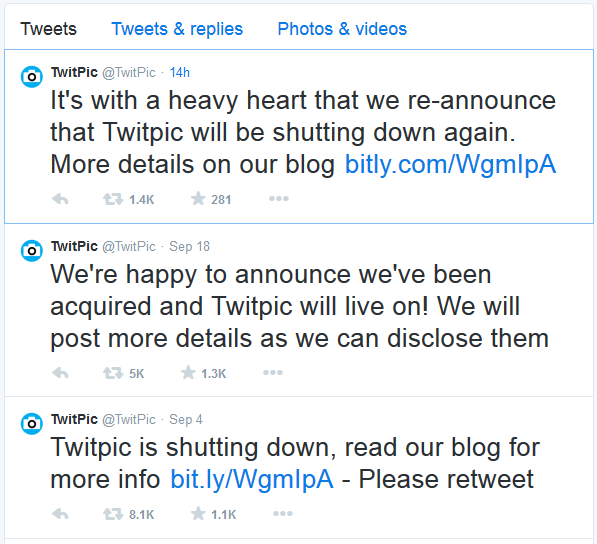 Google has released a brand new version of the Quality Rater Guidelines, the third one this year.  … END_OF_DOCUMENT_TOKEN_TO_BE_REPLACED