You are here: Home / Google / Tycoon Can Sue Google Over Autocomplete Suggestions for His Name

The suggestions for “triad,”, a Chinese organized crime syndicate, occurred in both English and Chinese when someone would search for “Albert Yeung” in Google.  Yeung, a well known businessman, accuses Google of libel over the suggestions. 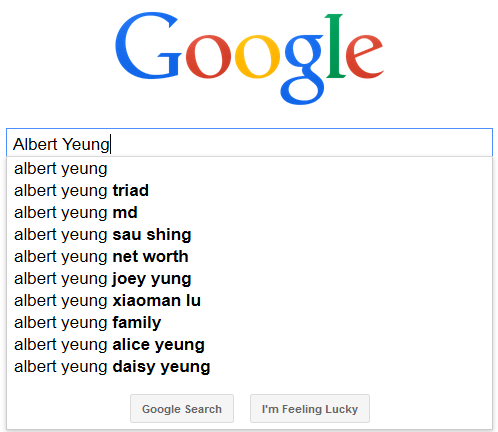 That said, it is very easy to influence Google’s autosuggest feature, and many have been doing it for years now.  This case definitely is falling victim to the Streisand Effect – because of the publicity surrounding the case, now even more webpages exist linking Yeung to the keyword “triad” as well as curious people searching for “Albert Yeung triad” to see what connections, if any, he had.

Google argued that because their autocomplete technology was purely algorithm based that they shouldn’t be held liable for the suggestions.

Google had tried to have the case dismissed before it can go to trial. It argued first that the Hong Kong courts do not have the jurisdiction over the company, and second that Google cannot be held responsible for search suggestions. It argued that auto-complete suggestions use an algorithm driven by the search terms a certain number of users are using.

However, the judge of the case clearly saw otherwise.

Judge Marlene Ng disagreed with Google’s lawyers, who argued Yeung was better off asking the websites where the defamatory information was published to remove it. She said Google had the ability to censor material.

“Any risk of misinformation can spread easily as users forage in the web. The art is to find the comfortable equilibrium in between,” she said in her ruling.

This could have wider implications if he is successful in suing Google, as then everyone who feels an autosuggest suggestion is defamatory could sue Google for damages.  It also highlights the idea behind the EU’s “Right to be Forgotten”, although that does not target autosuggestions but rather specific search results.

We finally have the first Google Quality Rater Guidelines update of 2022, and like usual, it is … END_OF_DOCUMENT_TOKEN_TO_BE_REPLACED