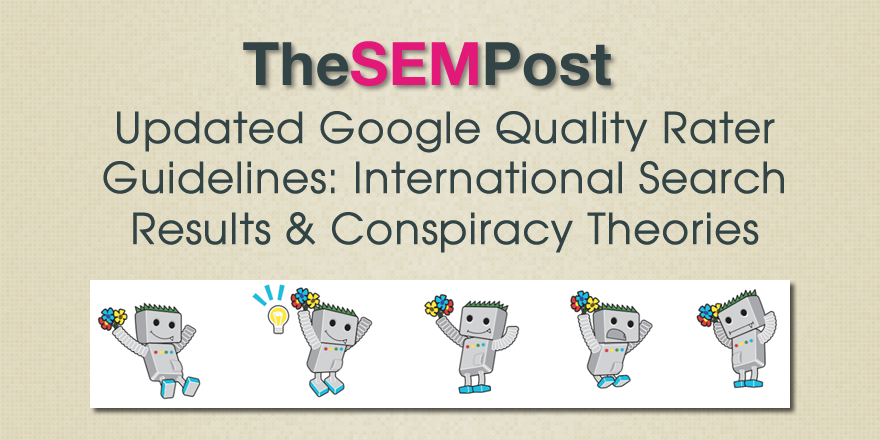 Google has once again very quietly updated their Google Quality Rater Guidelines with a brand new version.   This update comes as the third update this year so far (following ones in March and May), only months after we saw major changes with fake news.

There are some notable changes, especially for those SEOs who work in international markets, as this update seems primarily focused with international non-English results.  This is particularly where there are non-English languages being searched in, as well as cases where there might be both English and non-English mixed results from Google.

Here is a break down of all the things added, removed and changed in the latest version of the Google Quality Rater Guidelines.

Here they make a slight change, which seem more grammatical in difference.  Under the types of pages that are considered to be the lowest quality pages on the web, they removed the itallicized part below:

Pages or websites which are created to make money with little to no attempt to help users.

They have added a new example, which is pretty interesting in light of all the fake news and conspiracy theory additions made this year, as this one is a specific example of a conspiracy theory page – although it is definitely one of the less plausible of the range of conspiracy theories they could have chosen.

The example continues to show that raters should be able to find credible sources that have debunked the conspiracy theory.

It is great that Google is including specific examples of conspiracy theories to give guidance to the raters.  This was definitely one of the grey areas previously.

The changes here only applied to the raters for doing tasks.

They added specifically that anything related to user location is referred to as “Locale” in the guidelines.

All queries have a task language and task location (referred to in rating tasks as the “Locale”).

They updated the Coldplay screenshot to show what videos on mobile in the search results currently look like.

Here is the removed section:

Notable changes to this section.

A rather interesting change was made to the foreign language example.  Google removed the Ukraine / Russia example that was previously in this section and changed it to a Catalan example.  It isn’t clear why they made this change, other than it changed the example to being one of 3 possible language choices.

For example, most Catalan-speaking users in Spain also speak Spanish. Therefore, for rating tasks in Catalan (ES), the Foreign Language flag should NOT be assigned to landing pages in Catalan, Spanish, or English.

In the second set of bullet points in this section, some more notable changes were made.

First, they tightened up the reasons for using the foreign flag when there are locale issues in play.

For some reason, Google has swapped the positioning of the bars showing the EAT and Needs Met for the examples with screenshots in this entire section.  It is unclear why this was done, unless it is to better match how it is presented in the tool the raters use for evaluating.

Again, tightened up on locale issues.

This section also saw some changes, mostly to better emphasize the issue with English in non-English locales, which primarily involves unexpected English results when one would expect all the results to be in the language for the location searched from.

The following section has changed, the part in italics was added.

However, rating can be more difficult when the query includes English names, words, etc., or when it’s unclear whether English results would be satisfying for a particular query. Please use your judgment and knowledge of your locale to determine the appropriate rating.

They also added a very important paragraph to this with more details on English versus non-English results. Again this seems to be targeting international raters who are rating in either a single non-English language, or rating (or being familiar with) multiple languages.

Important: Please keep in mind that every locale will have unique considerations regarding the number and variety of  languages (such as official languages, regional languages, local dialects, etc.), writing systems, and keyboard input languages commonly in use. While this guideline may not include examples for your locale, it is important that you represent users in your task location and culture in order to interpret the query and rate results. When in doubt, please assume that users would prefer results in the task language unless the query clearly indicates otherwise.

This is an entirely new section, although the examples were simply moved from the previous section.  Again, Google is wanting to provide clearer definition for when English results appear when another language is expected.

They have added the following section, although a small part of it was rewritten from the previous section in the old version of the guidelines.

The section includes some examples using Hindi (IN) and Korean (KR) as the locales. In both cases, we cannot assume that users in these locales—i.e., Hindi-speaking users in India, or Korean-speaking users in Korea—are able to read English. Unless most users in the locale would be satisfied by English results for the query, we will consider them unhelpful or even useless ( FailsM ).

Some of the examples have been reordered for cohesiveness.

They have added a new section with examples as well.  They provided more commentary about non-English results that are being rated. Here is what was added:

On the other hand, there may be queries where the needs of most users would actually be satisfied by English language results, even if the query itself is typed in the task language.

For example, for queries about global businesses and organizations, users may expect or want to visit the English language version of the business/organization’s official website in some locales. Similarly, for queries seeking technical information such as manufacturer part numbers, product specs, scientific or chemical formulas, etc., the answer to the query may be typically expressed in the English language in some locales.

For these queries, users may expect or want to see English results in order to satisfy their need. Please use your judgment and knowledge of your locale to determine the appropriate rating.

There were some significant changes, but mostly as it pertains to non-English results.  So it could be that Google is working on quality and spam in non-English language results.

The conspiracy theory change isn’t that unexpected, other than it wasn’t added to the guidelines originally with all the fake news tackling additions.

You can download the latest version of the Quality Rater Guidelines here (July 27, 2017).

We finally have the first Google Quality Rater Guidelines update of 2022, and like usual, it is … END_OF_DOCUMENT_TOKEN_TO_BE_REPLACED