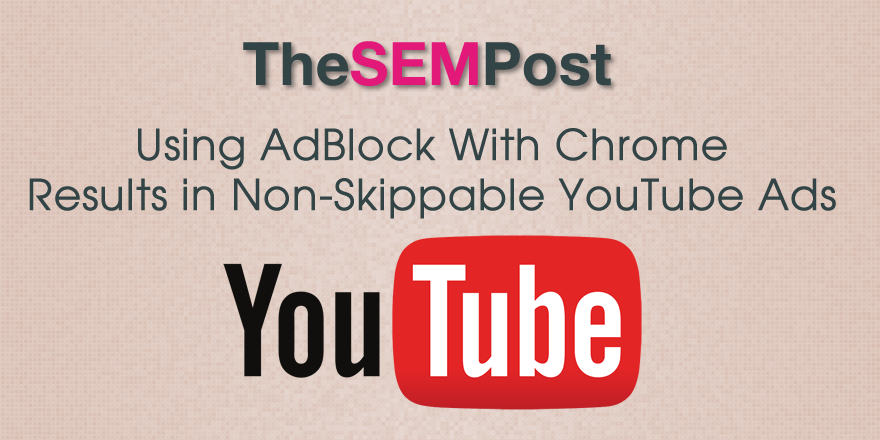 If you use Chrome and have noticed that all your YouTube video ads are suddenly non-skippable, you are not alone.  Users with AdBlock enabled are suddenly discovering that YouTube is seemingly only serving non-skippable ads.

The notion of non-skippable video ads isn’t new on YouTube, but it definitely isn’t the default method.  Most videos come with a “Skip in X seconds” option that allows users to skip video ads completely.  But for users of AdBlock in Chrome, Google seems to have removed the ability for those particular users to skip any YouTube video ad, regardless of length. The heart of the issue is that AdBlock seems to be seeing the “skip ad” button as the ad, and removes it.

Currently, this is only targeting AdBlock users in Chrome, who are also using the YouTube “app” in Chrome.  Removing the YouTube app from Chrome, will solve the issue, as will simply using Firefox instead of Chrome.

On the positive side, it seems that the change was unintentional while fixing a security bug in Chrome and is expected to be fixed.

We have been contacted by Rob Wu, a developer on the Chromium project – the open-source foundation for the Chrome browser – who has informed us that this change was not intentional but, rather, an unintended result of fixing a previous security issue (CVE-2015-1297). He confirmed that the issue will only be seen if the YouTube app is installed and that, at the moment, apart from disabling AdBlock or whitelisting YouTube, the only solution, as described above, is to uninstall the app. The problem is expected to be patched in the upcoming weeks or, at least, when Chrome 46 is released.

But from a marketer perspective, you have gained a captive audience for your YouTube video ads while those users do not have a way to skip them.  But those brands potentially risk alienating some of those users, especially for the longer video ads that tend to run minutes long, while the bug is active.

Targeting AdBlock users with specific content or ads isn’t anything new.  Seeing “We see you are using AdBlock, please consider adding example.com to your whitelist to support our site” messages is fairly common to see in place of ad units on many websites, as is the use of a tip jar or Amazon wish list.

The number of sites that begun disabling video playback for users running AdBlock is becoming more common.  While Hulu is probably the most popular site that employs this tactic, other sites such as ESPN and many television network sites also employ this tactic.

This change follows the recent Chrome addition that sees videos, including video ads, not begin autoplaying until the page is the currently active one in Chrome.

Google has released a brand new version of the Quality Rater Guidelines, the third one this year.  … END_OF_DOCUMENT_TOKEN_TO_BE_REPLACED