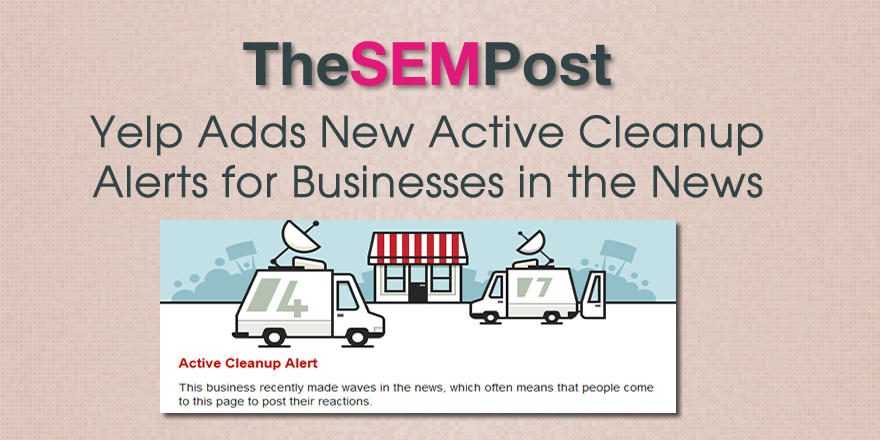 If you happened to look at the Facebook page of River Bluff Dental – aka the dental office owned by Cecil the Lion’s killer – you would have spotted a ton of one star reviews that were not reviews for the business itself, but rather thousands of people expressing outrage about the dentist and his hunting actions that resulted in Cecil the Lion’s death.

Now, Yelp seems to be finally making some changes to alert Yelp users who are looking for legitimate reviews, and who might not be aware that the business is “making waves in the news” by adding a brand new pop-up alert warning users that there is a cleanup in process for the business.  I discovered the new alert today when I went to view the dental office’s page to see how many of the reviews had actually been removed.

Here is the alert: 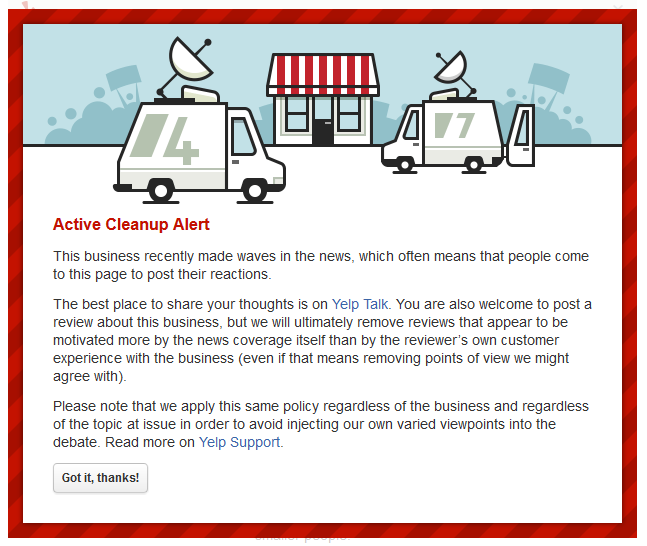 This business recently made waves in the news, which often means that people come to this page to post their reactions.

The best place to share your thoughts is on Yelp Talk. You are also welcome to post a review about this business, but we will ultimately remove reviews that appear to be motivated more by the news coverage itself than by the reviewer’s own customer experience with the business (even if that means removing points of view we might agree with).

It is showing up for both the dentist’s personal Yelp page and the Yelp page of the dental clinic.

It is also showing for a Texas business Gaslamp that was embroiled in a scandal regarding their cover charges being racist, and there are many negative reviews due to the news coverage of this story.  A dog groomer who was accused of abusing dogs is also showing the alerts as is a restaurant that refused service to someone with a service dog and a restaurant featured in a gross YouTube video.

Also showing an alert is the business that is attempting to sue an anonymous Yelper for leaving a negative review.

It isn’t showing up just for businesses that are having an issue with negative reviews, but with some businesses that are in the news for other reasons.  For example, there was a hostage taking at a California restaurant called “Chris’ & Pitt’s”, but it too is showing the Active Cleanup Alert.  There are comments mentioning the hostage situation, but nothing negative about the business itself.  So it could be this is automated somehow with a rapid increase of reviews left in a short period of time.

This seems to be brand new and seems to have been active since the beginning of the week.  The alert doesn’t stop people from viewing the page, once they click the “Got it, thanks!” button, they can read all the reviews, even the negative ones placed as a result of whatever controversy the business is embroiled in.

This is a good move for Yelp.  First, it alerts wannabe negative reviewers that their review may be removed if it is motivated by the news about the business and not the business itself.  But it alerts those who might view the page without the controversial context and not know they need to take a problematic news story into account.

Google has released a new version of the Google quality rater guidelines, a year after the last … END_OF_DOCUMENT_TOKEN_TO_BE_REPLACED