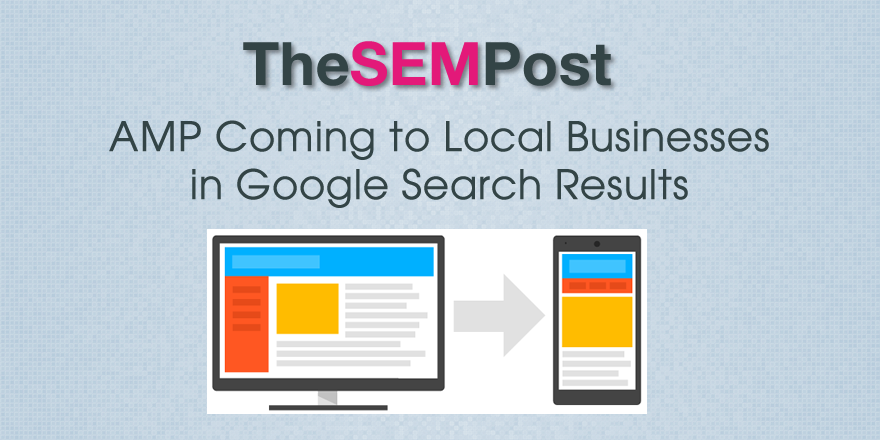 Google has been promoting AMP pretty heavily this year, and they have been very vocal about the fact they would be expanding it into other parts of the search results, even if they haven’t announced those what sections would be AMP=ed next.  But we might have a clue about an upcoming area where AMP will play an important part – local.

Elena L, who answers many of the AMP related threads on the Google Webmaster Help forum made the comment to a local business that implemented AMP that “AMP pages for local businesses are not yet surfaced by Google.” [Emphasis mine]

Local is one of the areas where I expect Google to go AMP sooner rather than later.  After all, a huge percent of local searchers are people searching from their mobile devices.    And providing AMP results for local searches could definitely skew the results people click, especially if placed in a format similar to Google’s “Top Stories” which currently displays AMP content in the search results.

There’s also additional benefits for local businesses adding AMP onto their site’s roadmap now.  By implementing it now, they have time to see those AMP pages crawled and errors show up in Google Search Console.  It can take up to a week for the errors to show up, and any AMP errors do need to be fixed before those AMP pages will show up.  So this gives a potentially large window to solve any AMP errors, which often pop up simply due to things like how the site’s template is set up.

Plus, local businesses that have a blog can see their content surfaced in the “Top Stories” section now, which could increase traffic to the site.  This means even local sites can currently take advantage of AMP related traffic, even before Google begins to use AMP for local specific searches.

Don’t forget that AMP pages aren’t expected to replace your mobile version of the site.  This is something additional for the site.

And right now, AMP pages that show in the AMP section and carousel can still have their regular mobile version of the page show up in the same search result’s page.  So sites aren’t sabotaging their site’s rankings or potential traffic with an AMP version.  But it does mean that for those who specifically want an AMP result for speed or bandwidth reasons have it easily available.

The big question is when that “yet” is.  Could it be this month?  Could it mean the end of the year?  I would be surprised if it was that long, with how hard Google is promoting AMP and with local being such a natural space for Google to add AMP support.

But since there are other advantages to implementing AMP even before Google does turn on AMP pages for local searches, and the time needed to fix AMP errors, it does make sense to implement AMP sooner rather than later… or at least get it on the site’s roadmap with the site’s dev team.