Bing Ads has launched their promised update of Bing Ads for advertisers, revamping the user interface and adding additional functionality and features that have been requested by the community.  This new look has been beta tested by Bing Ads advertisers for feedback prior to being released to more advertisers.

The new look, which has started to roll out across publisher accounts, has been redesigned to make it more intuitive for both seasoned pay per click advertisers as well as for beginners, and brings it closer in line with the Google AdWords UI that most advertisers are familiar with.

This round of improvements includes:

The UI is much cleaner and looks closer to Google AdWords to make it more familiar.  Here is how it looked previously, followed with the new look: 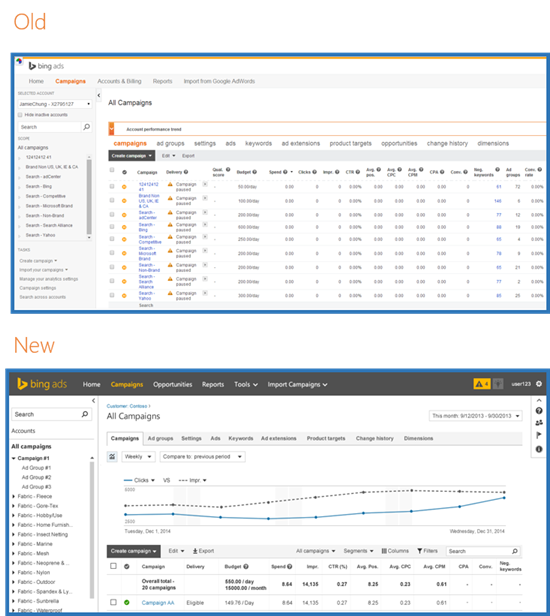 Access to the Bing Ads tools is much more streamlined.  In the old version, it was clunky in the way they various tools were displayed.  Now they are in an easy access drop down menu that can be accessed from different areas within the account, rather than having to click a link to go to a separate page in order to access those tools.

When you get the new look within your account, Bing Ads has added helpful hints and notes to make the transition to the new user interface easier for advertisers.   They highlight areas that have changed as well as showing where new features and additions have been made.

For those who love all things metrics, you will be pleased to know you can now compare up to six different metrics within the Trend Charts in Bing Ads.  This allows advertisers to easily analyze performance in a number of areas, including spend, clicks, impressions, conversion rate and average cost per click, all within the same graph.

Here is how the  comparison Trend Charts will appear in the new interface.

The Opportunities page has been completely resigned to make it clearer to advertisers what needs improving or changing.  It is now much more easily accessible in Bing Ads interface so advertisers can find it easily and check on changes that might need to be made.  The new design emphasizes what might need adjusting, assisting newer advertisers as well as seasoned Bing Ads users who might have missed something or need to react as a market area changes.

Here is the look of the new Opportunities page. 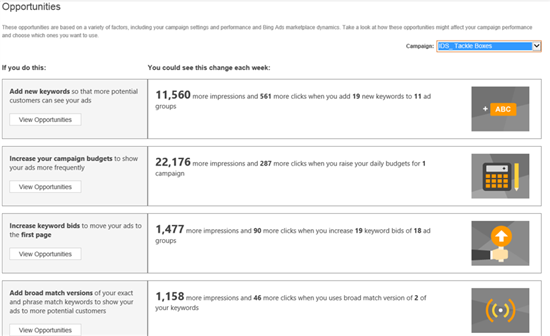 While this change is not yet live, a new undo functionality will make it easier for advertisers to determine the effectiveness of changes.

The grid in the redesigned Change History tab will now group the changes, making it easier for users to quickly navigate the grid and pull relevant data. Each row in the grid will contain changes made at the same time by a given user. Within each row, changes are further grouped by campaign, then by ad group. A new column labeled “Change” details the entity level changes. Next, we are introducing the capability to filter by user and also making the change type filter more visible by placing it right above the grid. In addition to all this, we continue to differentiate by overlaying the change history bubbles over the performance trend graphs. The change history bubbles provide an intuitive way to filter by time allowing the user to rapidly narrow down to the changes that made the most impact to the campaign performance.

Bing will also allow you to undo changes from within the user interface in an upcoming addition as well, which will make it easier for advertisers to revert changes, especially for newer advertisers who might not be keeping close track of changes and their effects.

When is it Coming?

Bing Ads has begin rolling out the changes to advertisers this week and all advertisers will be switched over by the end of the month.  However, some features may not be available immediately after you begin seeing the new user interface, as they are ensuring all features are working properly as   If you have an ad rep at Bing Ads, you can always contact him or her with fingers crossed to see if it is possible to be fast tracked for the new UI.

These changes should be making some advertisers pretty happy, as well as making the process of advertising through Bing Ads a bit easier for new pay per click users who might already have learned PPC through AdWords.

Google has released a new version of the Google quality rater guidelines, a year after the last … END_OF_DOCUMENT_TOKEN_TO_BE_REPLACED