Marketers have been wondering how Instagram and Facebook would begin to merge on the advertising side of things, particularly when it comes to relationships between the two from an ad tracking perspective.  And it looks like we have hit the point where ads can be targeted to users on Facebook because of an image they saw on Instagram.

Instagram is conducting a test with Mercedes-Benz that allows the luxury car brand to effectively target Facebook users who previously saw one of its Instagram ads, according to executives familiar with the campaign. Several other advertising agency execs who also recently met with Instagram said Instagram has discussed the test with them and intends to make the capability more widely available in the future. 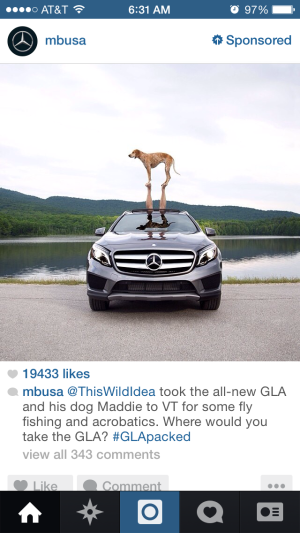 The reverse could also be true, where a person who likes a brand on Facebook could end up seeing ads for that brand when they view random photos on Instagram.

Instagram’s Q&A page states the possibility of advertising between itself and Facebook based on content viewed on either.

What does this mean for marketers?  It means more market areas for your Facebook ad spend.  But the question remains if an ad on Instagram would be worth as much as an ad or a sponsored post would be on Facebook.  But hopefully we don’t come to a point where Facebook attempts to force advertisers to advertise on both social media platforms, which wouldn’t be such a big stretch with how much Facebook is trying to force brands to advertise by reducing their organic footprint.

Google has released a new version of the Google quality rater guidelines, a year after the last … END_OF_DOCUMENT_TOKEN_TO_BE_REPLACED