You are here: Home / Facebook / Facebook’s Rainbow Filters and the Algorithmic Echo Chamber 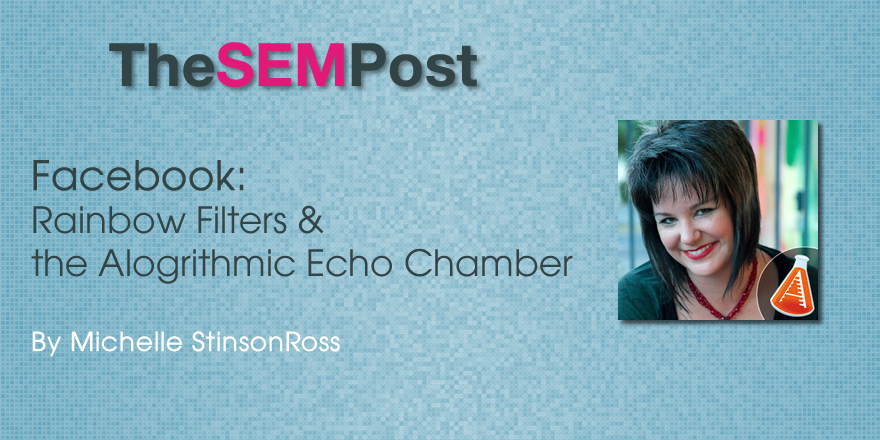 This weekend has been full of news and momentous occasions that have made a significant impact in media outlets of all shapes and sizes. From local news papers to major national television news networks to the individuals with righteous opinions of every stripe, we cannot turn on a TV, radio, computer or personal device without coming into contact with the news of the day.

But how reliable and unbiased are all of these little tid-bits? Can we really be sure that we are getting an accurate picture of the world around us based on the aggregation of all the information we take in during the course of the day?

Facebook would like us to believe that they can serve as a reliable one-stop-shop for news and everything else we really care about. They are currently in the process of working with publications of all kinds to directly publish content to Facebook for consumption within Facebook.

But will that really best serve the needs of people all over the planet and help them “connect with the world” as Facebook states their purpose in being?

Looking at the News Feed

Let’s use my personal news feed as an example. Once the Supreme Court announced it’s ruling regarding marriage equality in the US, my news feed started skewing towards all kinds of shares of articles and videos from traditional news outlets. Then all of the sudden there were more personal posts from friends about mass weddings and other events they were attending to celebrate the ruling. Then my feed and comments on posts started turning into rainbows.

Facebook actively pushed a special rainbow pride filter for users who wanted to show their support for the Supreme Court ruling. This filter wasn’t just being used by friends here in the states. Connections from Canada, Japan, and all over the world were turning into rainbows. The other half of my connections started getting geared up to point out how this latest cultural shift is degrading the vaunted principles this great nation was founded on. By Sunday I started seeing just as many profiles filtered with a Christian cross as I saw with rainbows.

This is all well and good from the standpoint of individual freedom of expression. ALL of the people I’m connected to have every right not only to hold dear their personal beliefs, but shout them from the rooftops for all to hear, should they so desire.

Is Facebook a News Outlet or an Echo Chamber?

My concern stems from how Facebook culls through all this activity and uses it to serve up content to individual users in the news feed.

Facebook takes into account the how each user interacts with people we actively sought out for friendship, brands and other “non-human” entities that we actively indicate some sort of affinity, and what kinds of content we share with those connections. All of this behavior then becomes the algorithmic filter that is supposed to serve us the very best of everything posted on Facebook. Feeding us the content that matters most to us as individuals.

So, is Facebook really a good outlet for news or just an incredibly efficient echo chamber for our own opinions and biases?

Let’s take the rainbow profile filter into consideration for just a moment. It was actively pushed to users as a quick and easy way for them to show support for the marriage equality ruling. But how will Facebook use this very personal information about the users who chose to use the filter? What algorithmic determinations will it make about the people who continue to engage with those users? How about the ratio of people unfriending each other over the use or not of this filter?

Like it or not, this one little visual cue is really a great big social experiment and the results will be part of what determines the next iteration of the news feed algorithm.

To keep users on Facebook more often and for longer periods of time, so that they can serve more ads and earn more revenue, Facebook will continue to tailor itself to make each individual feel good about who they are, the beliefs they hold, and the choices they make.

That means that users who don’t want to live in a self-centered echo chamber will have to work that much harder to keep bias at bay and bring more well rounded thought into their circles of influence. That means that no matter how offensive I found some of the images and comments in my feed recently, I probably will think twice about booting those people from my Facebook life in order to maintain some sense of reality in my newsfeed.

Are Users Even Aware?  And  Do They Care?

How many Facebook users are even that aware that their digital world has been incrementally shifted to look more and more like them? Their continued behavior will feed that echo chamber.

Facebook is walking a fine and precarious line between serving the best interests of its users and the financial expectations of its shareholders.

When it comes to taking in the news of the day and making well informed decisions about the world around you, do you want to determine the voices you hear and the conversations that matter, or would you like that control given over to an algorithm based on the social experimentation of the programmers at Facebook?

Content & Outreach Goddess at AuthorityLabs
Michelle Stinson Ross is a digital marketing industry recognized authority on the outreach power of social media. She has worked as a community manager and consultant for several brands to increase brand awareness, raise the visibility of special promotions, and train their teams to use the social space to connect with media influencers and the public. Michelle is part of the marketing team at AuthorityLabs and co-hosts #SocialChat, a Twitter based live chat that covers a variety of topics geared toward social media marketing (Mondays at 9 p.m. ET). Her passion for social media marketing has made her a regular conference speaker at events like ClickZ Live, and Search Marketing Expo. She has also been a featured guest on Webmaster Radio and several industry Hangouts on Air.

Google has released a new version of the Google quality rater guidelines, a year after the last … END_OF_DOCUMENT_TOKEN_TO_BE_REPLACED