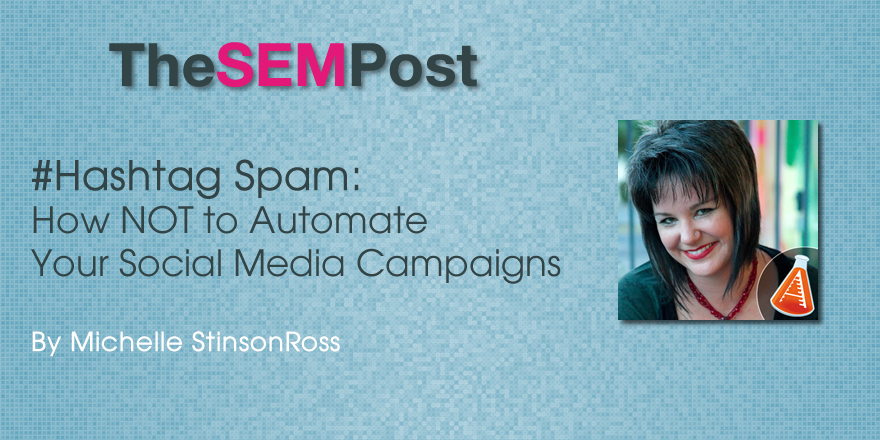 Oh the crazy life of a Community Manager! Somehow we are supposed to keep 12 different social channels active on 12 different schedules with custom content for each audience without losing our minds. If we are agency and not in-house, we are most likely running those twelve channels multiplied by several clients. There aren’t enough fingers on our hands or hours in the day.

Most of us take advantage of several great tools and services, many available for free, to schedule and automate the daily process of content production and distribution across our brand’s active social channels. But great tools can become a social media pit fall when not used properly.

This is the stuff that will make any serious devotee of Twitter want to tear their hair out. For the last 4 years a colleague and I have hosted #SocialChat on Twitter. We have cultivated some amazing connections and valuable friendships over that period of time. We have also reported more than our fair share of Twitter spam; everything from generally crappy tone deaf posts in the middle of a heated chat to more porn accounts than anyone would ever want to come into contact with. We’ve also been able to help out more than a few accounts recover after being hacked. But this latest iteration of chat related twaddle has us screaming on a daily basis.

This is but a small sampling of the string of useless tweets we see posted multiple times a day. As you can see we aren’t the only chat hit with these strings of noise.

When we started seeing these tweets, always posted in bulk like this, we assumed that it was probably a bot running several accounts. We reported the lot as spam to Twitter. But the tweets just kept coming and coming and coming. Our whole #SocialChat community has been helping to report this stuff as spam for months, and we still can’t react fast enough.

At one point my co-host, Alan K’necht, decided to dig a little deeper into the accounts we were reporting. A good portion of these accounts, although small, seem to be legit when you take a look at the rest of the content they share. He reported that they didn’t seem as bot-like as we first though.

So, what’s the deal? None of us want to report legitimate accounts as spam and possibly shut them down, but this practices of tweeting nothing but lists of hashtags provides no value to the accounts posting them or the communities represented by the tags.

Then I made a discovery in TweetDeck. 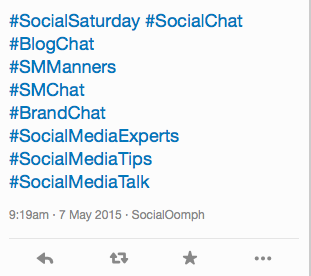 Note after the time and date that TweetDeck lets us know what was used to generate the post, in this case SocialOomph. So we went clicking through a bunch of these posts for several days. Every one of them was posted via SocialOomph. So, we reached out to them. Since there has been no response, we started posting this.

Myself, @SocialMichelleR & others are starting to report all the hashtag spammers to Twitter. Pls @SocialOomph stop the spam. #socialchat

Ranting and reporting is all well and good, but we would rather give you something useful.

First of all, as a community manager I have my issues with any service that will automatically create spam like this. Social Oomph even touts the ability to “plan, set, and forget.”

NEVER set and forget anything on social media.

Don’t let an automation tool create content for your accounts, either. The whole point of having a social media account should be to connect with people. In order to do that you have to keep your hands on the content you share, so that your remain on point and hold the interest of the communities you’re building.

Is there a place for automation and efficiency?

Yes, so long as you understand that scheduling (a good thing) is not automation. By all means schedule content that you want to share so that it’s spread out across your day, week, month. It’s amazing how quickly one person can handle a bulk of outbound posting duties with a good scheduling tool and give themselves more time to spend engaging with the members of their communities. But that is not the same thing as allowing a service to go off on its on to post on your behalf at certain times of the day or in response to follows, mentions, or messages.

Some tools that are fabulous for scheduling and more:

Content & Outreach Goddess at AuthorityLabs
Michelle Stinson Ross is a digital marketing industry recognized authority on the outreach power of social media. She has worked as a community manager and consultant for several brands to increase brand awareness, raise the visibility of special promotions, and train their teams to use the social space to connect with media influencers and the public. Michelle is part of the marketing team at AuthorityLabs and co-hosts #SocialChat, a Twitter based live chat that covers a variety of topics geared toward social media marketing (Mondays at 9 p.m. ET). Her passion for social media marketing has made her a regular conference speaker at events like ClickZ Live, and Search Marketing Expo. She has also been a featured guest on Webmaster Radio and several industry Hangouts on Air.

We finally have the first Google Quality Rater Guidelines update of 2022, and like usual, it is … END_OF_DOCUMENT_TOKEN_TO_BE_REPLACED