You are here: Home / Google / France Orders Google to Remove Right to Be Forgotten Results from All Google Sites 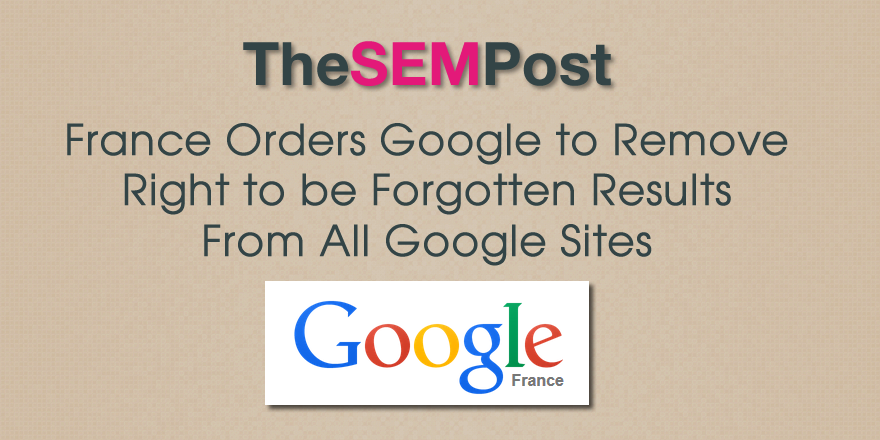 France has given Google 15 days to remove all Right to be Forgotten results from all versions of Google, including Google.com rather than just the European domains as Google currently does not.

Ever since Google began removing specific results under Right to be Forgotten, they only removed them from the European Google results, while those outside the EU, as well as Google.com, retained those results.  Now the French data protection watchdog is ordering Google to remove those results from all versions of Google, including Google.com.

In details the CNIL (France’s data protection authority) released today, they state that if Google doesn’t remove the listings from all versions of Google within 15 days, they will impose sanctions on the company.  They do not specify what the sanctions will be.

One of their main issues is the number of complaints the CNIL has received about Right to be Forgotten listings not being removed from all versions of Google, which they number in the hundreds.

Following the assessment of the complaints, the CNIL has requested Google to carry out the delisting of several results. It was expressly requested that the delisting should be effective on whole search engine, irrespective of the extension used (.fr; .uk; .com …).

Although the company has granted some of the requests, delisting was only carried out on European extensions of the search engine and not when searches are made from “google.com” or other non-European extensions.

In accordance with the CJEU judgement, the CNIL considers that in order to be effective, delisting must be carried out on all extensions of the search engine and that the service provided by Google search constitutes a single processing.

Last year, regulators in Europe argued that the link removals should be removed from all versions, including Google.com, but Google continued to just remove them from the EU versions only.

Techcrunch received a statement from a Google spokesperson, although that person did not directly address the CNIL’s order directly.

“We’ve been working hard to strike the right balance in implementing the European Court’s ruling, co-operating closely with data protection authorities. The ruling focused on services directed to European users, and that’s the approach we are taking in complying with it.“

France has been in the news recently with other demands they want to make on Google.  Earlier this year they wanted to force Google to reveal their search algorithm in order to determine whether Google was favoring its own properties in the search results over competitors.  They also want Google to place 3 competitors on their homepage, including one from France.

However, with only 15 days until the CNIL’s deadline, it won’t be long before we learn which route Google plans to take with the new CNIL order.

Google has released a brand new version of the Quality Rater Guidelines, the third one this year.  … END_OF_DOCUMENT_TOKEN_TO_BE_REPLACED