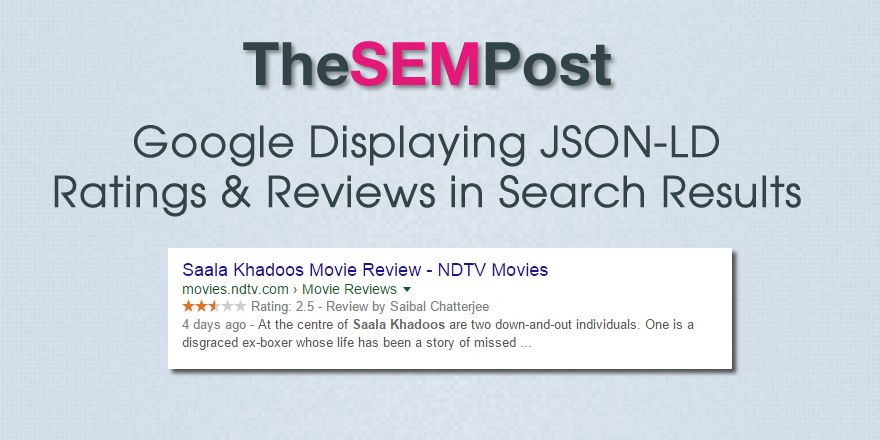 Ramesh Singh sent me these screenshots where they were testing JSON-LD implementation on their site to test when Google would begin picking up the JSON-LD markup for ratings and reviews.

They put the JSON-LD markup on their pages about three months ago, around October/November and were waiting to see when Google picked it up, which it just did.  So this is a very recent change Google has made.

Google is also displaying it in the knowledge panel that appears both above the search results and in the right sidebar.  Here is an example:

Google has said they plan to expand JSON-LD into more categories, and we have seen recipes in JSON-LD format starting last year.  Google also supports critic reviews, although Google’s help support page hasn’t been updated to reflect the new types of JSON-LD categories Google will display.

On the support page for Reviews & Ratings, Google says “We are in the process of implementing JSON-LD support for this Rich Snippet type. At the current time, we recommend using microdata or RDFa.”  The page does give the JSON-LD examples, though.  But this page also hasn’t been updated since August 2015.

John Mueller also recently commented on it asking webmasters to “hang tight” on the implementation, but with confirmation that it is now rolling out into the search results, I imagine that some webmasters will jump in with their own testing.

It is great to see Google continue expansion across JSON-LD, especially since many webmasters prefer it for schema markup. And I expect we will continue to see this roll out, although this one was one that many were anxiously waiting on.

Google has released a brand-new Google quality rater guidelines, coming close to a year after the … END_OF_DOCUMENT_TOKEN_TO_BE_REPLACED