You are here: Home / Google / Google Loses Appeal; Must Remove Right to Be Forgotten Worldwide 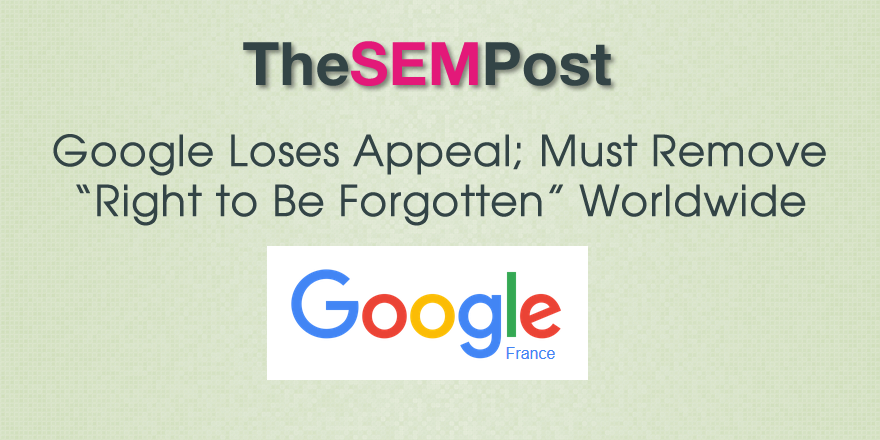 Google has lost the appeal in France that requires the search engine to remove “Right to be Forgotten” removed results from all versions of Google – including Google.com – instead of just the Google results in the EU.

Earlier this year, the CNIL (Commission Nationale de l’Informatique et des Libertés) ordered Google to start applying the “Right to be Forgotten” removals across all versions of the search engine, not just results displayed within the EU.

Currently when Google removes a search result under the “Right to be Forgotten”, they only remove it from various EU versions of Google, which includes Google.fr, the Google version for France. But for those searching outside of the EU, they would see those removed results.

This is one of the reasons given by CNIL – that it is too easy to circumvent.

If this right was limited to some extensions, it could be easily circumvented: in order to find the delisted result, it would be sufficient to search on another extension (e.g. searching in France using google.com), namely to use another form of access to the processing. This would equate stripping away the efficiency of this right, and applying variable rights to individuals depending on the internet user who queries the search engine and not on the data subject.

Google’s argument as that this law should only apply to search results in the EU since it is not a global law, but rather one for the EU. They see it as a form of censorship that impacts the world. However, CNIL argues that they do not see it this way, but that Google should comply as part of doing business within Europe.

Finally, contrary to what Google has stated, this decision does not show any willingness on the part of the CNIL to apply French law extraterritorially. It simply requests full observance of European legislation by non European players offering their services in Europe.

Google now must immediately comply with the CNIL’s decision to remove all of the “Right to be Forgotten” results for all citizens of France across Google worldwide. If Google refuses to do so, they can be hit with sanctions as well as fines that increase for repeat offenses. This only applies for “Right to be Forgotten” results where citizens of France are the subject of the removals. This doesn’t apply to other EU countries, however some could follow suit.

Google does not have any way to appeal this, and the next move by France would be sanctions and fines for non-compliance by Google. But the fines could be hefty – which could go as high as between 2-5% of Google’s global operating costs. Their only option at this point is to challenge the fine later, as there is not another legal avenue for appeal.

Google has released a brand new version of the Quality Rater Guidelines, the third one this year.  … END_OF_DOCUMENT_TOKEN_TO_BE_REPLACED