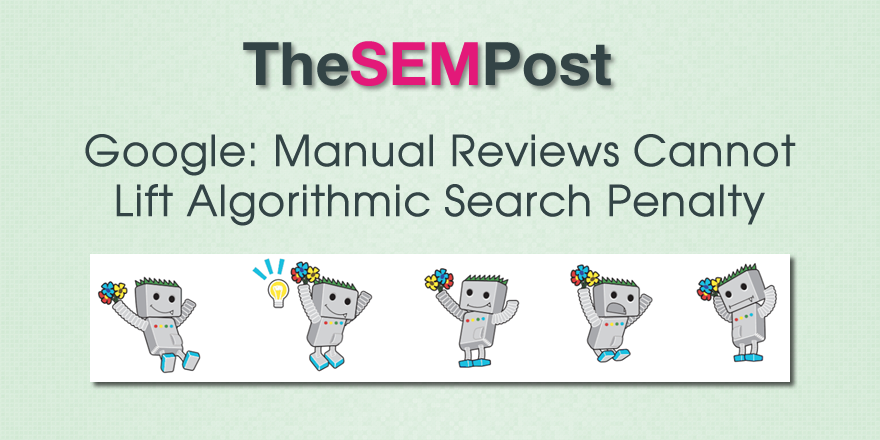 If you are hoping Google can do something on their back end to lift an algorithmic penalty, you are out of luck.  Google does not have something that can remove an algorithmic penalty – such as from impacted by Panda, Penguin, or the many other algo signals – so a site will rank better in the search results.  Google has said this on numerous occasions, but the question still pops up.

It came up again during the Reddit AMA John Mueller did this week.

There’s no “reset button” for a domain, we don’t even have that internally, so a manual review wouldn’t change anything there.

The fact there is no reset button isn’t a surprise.  For manual actions, those can be removed by Google, but algorithmic penalties cannot. If a site ends up being demoted in the organic search results that shouldn’t be, Google prefers to deal with those situations by adjusting the algo to fix the issue, so it fixes not only the one site but any others that were caught with the same algo change.

On the same note, triggering a manual action won’t fix algo issues even when the reconsideration request is accepted.

He does continue and says that if the site has a long history of issues, it can sometimes be easier to move to a different domain rather than go through the process of cleaning it up.

If there’s a lot of bad history associated with that, you either have to live with it, clean it up as much as possible, or move to a different domain. I realize that can be a hassle, but it’s the same with any kind of business, cleaning up a bad name/reputation can be a lot of work, and it’s hard to say ahead of time if it’ll be worth it in the end.

This is something a lot of SEOs recommend as well, for domains that have been spammed.  Clean slate domains are almost always easier to rank than ones with spam baggage to deal with first, either historically or as part of the current site, especially since quality improvements can take months to be reflected in the search results.  And for new sites with ranking issues, checking the history of a domain is one of the first things SEOs check.

But Google can’t simply “press a button” and remove an algorithmic penalty from a site.  So if your site is affected in the search results by one of the many Google algorithms, the only solution is to improve your site to be the kind of site the algo wants to reward with higher rankings.

We finally have the first Google Quality Rater Guidelines update of 2022, and like usual, it is … END_OF_DOCUMENT_TOKEN_TO_BE_REPLACED