If you are an SEO who makes extensive use of video rich snippets in the search results, Google has made a change that dramatically affects the number of video thumbnails (snippets) that appear in the Google search results.  The changes also hints that there might be an algorithm change that goes beyond video snippets in play as well.

SEER Interative, an online marketing agency, was the first to notice the change, and both search results and MozCast data supports that Google has made a change affecting video snippets.

Moz has updated their chart since the SEER post went live on the 16th, showing that there is a 4% increase over yesterday and the number of video thumbnails showing in the search results.  However, the decline is still quite dramatic, from 14.8% on July 16th, dropping to 10.7% on July 17th and increasing slightly to 11.1% on July 18th.  But will that uptick continue?

SEER Interactive includes a screenshot which shows how dramatic the change appears, when comparing a search result page from before the change to one after the change.

However, related to the slight increase in video thumbnails that Moz is seeing, today’s search results show more videos at the start of the search results compared to July 16th, although all 3 in the top 3 spots are from YouTube.  Here is my screenshot from today’s search results, blue boxes showing YouTube while Red shows non-YouTube results.  This screenshot was taken from Google.com without being signed in to a Google account. 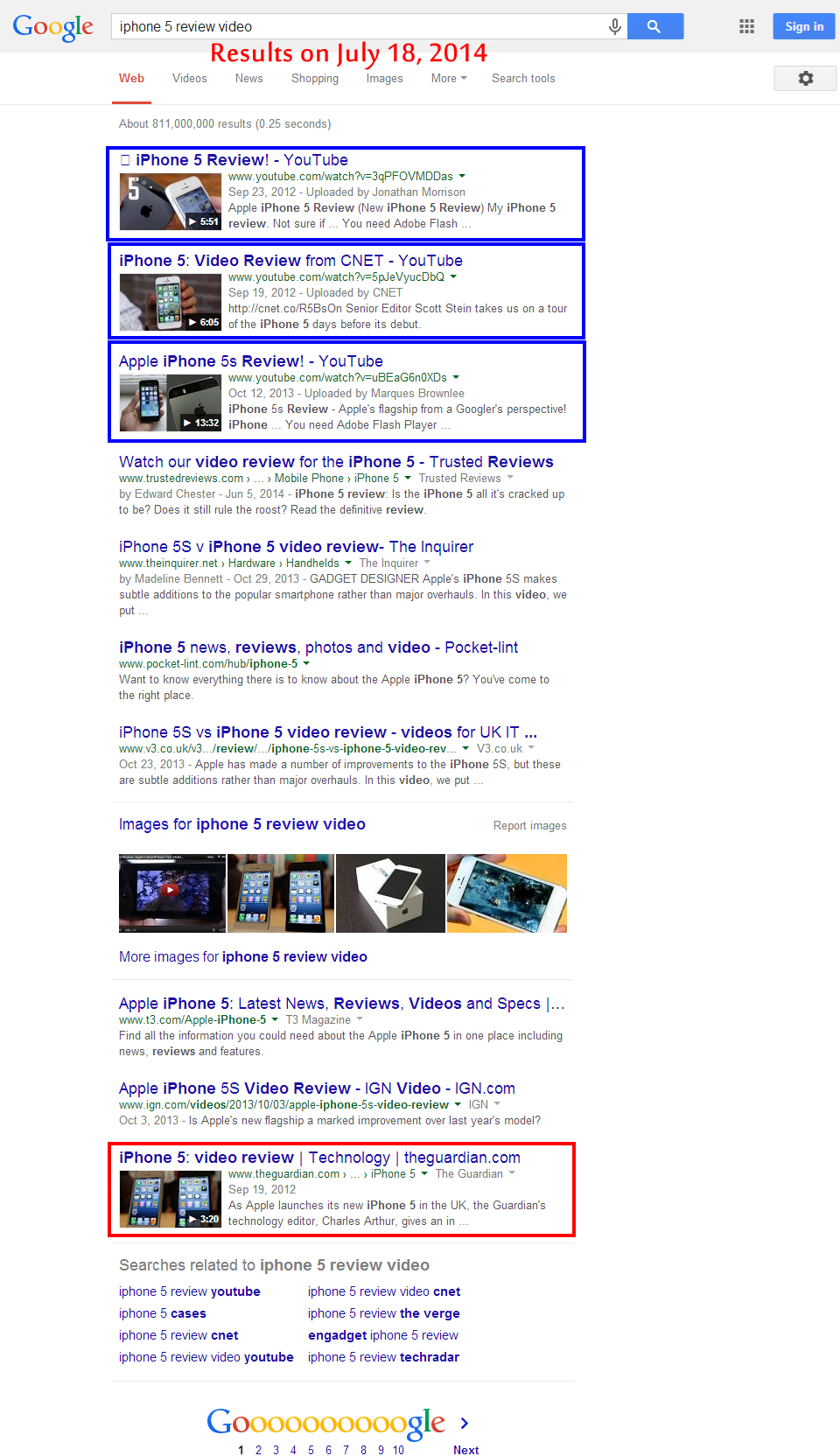 On the second page, there are 3 more videos from The Guardian but none from YouTube.  Here is a screenshot of the search with 20 results to a page (with slight flunctuation in results between this screenshot and the earlier one, as YouTube has lost one result while Guardian has only gained one extra video snippet instead of three.

However, when comparing today’s search results with the screenshots from the 11th and 16th, it appears that more than just snippets has changed and that the algorithm itself has changed.  This algo change could be completely unrelated to the video snippets change, particularly since the change occurred after the initial video snippet reduction on the 16th.

There has been speculation that the change was related to the recent authorship change, which saw author thumbnails disappear from the search results.  However, a Google spokesperson has confirmed that the change is not authorship related.  Google also confirmed that video snippets will continue to display in the search results.  “We’ll continue to show video snippets where it’s most relevant,” said a Google spokesperson to TheSEMPost.

John Mueller, a Google Webmaster Trends Analyst, has also stated that the change is a usual fluctuation by Google, in response to SEER Interactive’s Chad Gingrich. 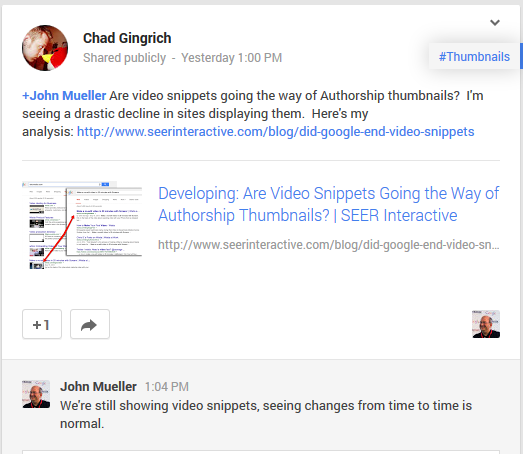 For those SEOs who have lost visibility with the new video thumbnail changes, there are some things webmasters can do to mitigate the changes.  “A recent analysis of Google universal search results by Searchmetrics (June 18, 2014) found that videos appeared in 65% of Google searches in the U.S,” says Greg Jarboe, President and co-founder of SEO-PR.  “However, 54% of these video results were from YouTube, about 5% were from Vimeo, about 5% were from Dailymotion, and MUZU TV, Howcast, Artistdirect, and eHow each had about 1%.”

Jarboe also sees that Youtube still has a stronger placement compared to non-YouTube video sources.  “In addition, the average first Video integration from YouTube was about two positions ahead of the average first position of a video from any other website,” says Jarboe.  “So, although it may seem counter-intuitive, your best strategy for improving the ranking of your video content in Google universal search results often involves improving the ranking of your videos in YouTube instead of using schema.org to mark up your videos or creating a Google Video Sitemap.”

The change is not necessarily a bad thing, at least from a user experience perspective.  Some search results pages, especially for specialized queries, show quite a high number of YouTube and other video results, all with video thumbnails – this was something I remarked upon two years ago while doing a highly targeted search, when I went through 3 pages of results and only had 4 non-YouTube results at all.  Having more relevant videos in the search results with a good amount of non-video content makes a good user experience, at least until Google starts personalization skewing towards whether they know if a searcher prefers watching videos or not.

This is definitely something for SEOs to keep an eye on, especially for those who have many videos in the search results.

We finally have the first Google Quality Rater Guidelines update of 2022, and like usual, it is … END_OF_DOCUMENT_TOKEN_TO_BE_REPLACED