You are here: Home / Google / Is the Google update mostly SSL implementation issues?

There has been a lot of chatter about a possible Google update happening late Friday and over the weekend.  However, while there were two UK link networks that were penalized, it is unclear if there was actually an update or if it is fallout from the panic SSL switches that many websites are in the midst of changing to SSL.

When Google announced that websites would have a ranking boost for utilizing SSL, there seemed to be a mad rush of websites scrambling to switch over to HTTPS.  But along with the switchover, some companies were running into technical difficulties, the largest one being the insecure warnings that are popping up in web browsers when someone tries to visit a site.

There are many sites running into this issue.  It isn’t just smaller sites that are having issues… The Guardian is also one.

And the warning is just as dire for Firefox users.

Google Webmaster Tools is also noticing the problems and is sending out crawl error emails to those who are affected by certificate problems, so this is definitely going to have an impact on the search results.

There is something definitely going on in the search results, and a couple people reported that some penalties were lifted. And Mozcast is also showing changes. 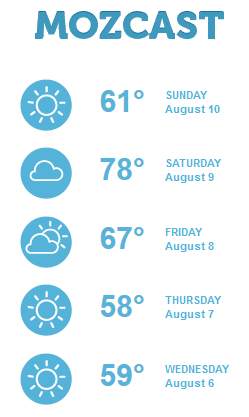 “I haven’t really seen much change in the sites that I monitor,” says Marie Haynes of HIS Web Marketing.  “There is possibly a slight decrease in one site that has seen multiple increases with Panda refreshes since the May 20th Panda 4.0 update.  And again, possibly a slight increase in traffic for one site that has been working on fixing Panda issues.  But, there really is nothing conclusive.  I have seen no change in sites that are waiting for a Penguin refresh.”

I also reached out to Google but they responded they have no comment.

We finally have the first Google Quality Rater Guidelines update of 2022, and like usual, it is … END_OF_DOCUMENT_TOKEN_TO_BE_REPLACED