You are here: Home / Google / Why Haven’t We Seen a Penguin Algo Refresh From Google? 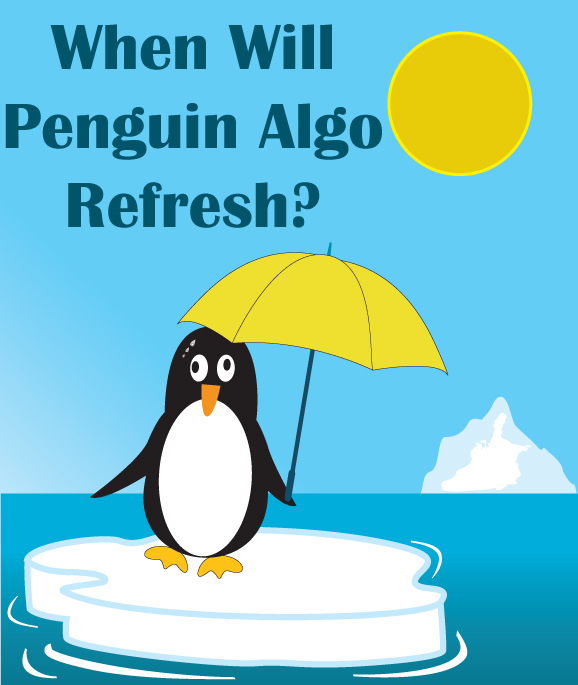 We haven’t seen a Penguin update since last October, and many people are questioning just why that is.  John Mueller in a recent Google Webmaster Office Hours that engineers were working on a new Penguin update, but for those suffering in Penguin purgatory, it is an awfully long time to wait until they are back in Google’s good graces and can see increased traffic from Google searches once again.

In a new CNBC article, the author is questioning whether or not Google has “lost control of its anti-spam algorithm.”

After being hit by Penguin, webmasters seeking to get back in Google’s good graces have to locate the spam, get rid of it and then wait for Google to hit the refresh button so they can—hopefully—climb back up the rankings. But here’s the problem.

Penguin hasn’t refreshed since October, so businesses hurt by the latest update almost a year ago are still reeling even if they’ve spent massive amounts of time and money to regain compliance. Some of them, as far as they knew, did nothing wrong, says Josh Bachynski, a consultant who works with companies on search engine optimization (SEO) and is a regular critic of Google’s practices.

With 1o months now since the last Penguin refresh, it definitely is a hardship not knowing if and when a new refresh to the Penguin algo will hit.  And for some of those people, if they had known the site could be out of commission for this long waiting for an update, it would have made more sense to build a brand new website have it ranking by now.

And another problem with the Penguin refresh taking so long is that webmasters who think they have cleaned up their site of Penguin issues won’t really know for certain if they have managed to do a good enough job or not until that refresh hit.  And if not, they could face yet another 10+ month wait for the next one.

While some of these Penguin cases were the result of either their own misinformation about what SEO tactics were good and which were not, others have been impacted by SEO that was done years ago when some of the techniques were still accepted practice.  Other Penguin victims hired the wrong SEO company that caused the penalty.

“We frequently hear claims of ‘negative SEO,’ but when we’ve investigated we haven’t found evidence that it’s actually a significant problem,” company spokesman Jason Freidenfelds said in an email. “In fact, our algorithms are designed to prevent this, and we use multiple signals to determine quality and relevance.”

Which brings us back to when will we see a new Penguin update?  I suspect it will be sooner rather than later, unless they are having a problem of false positives in their refresh the engineers are working on.  But whenever it does hit, it will be pretty big news as SEOs determine which sites got their Penguin purgatory lifted, which ones remained penalized, and what the metrics are for any new sites that get penalized when Penguin refreshes.

Google has released a new version of the Google quality rater guidelines, a year after the last … END_OF_DOCUMENT_TOKEN_TO_BE_REPLACED