You are here: Home / Chrome / HTTPS Navigations in Chrome Increased 5% in Last Year 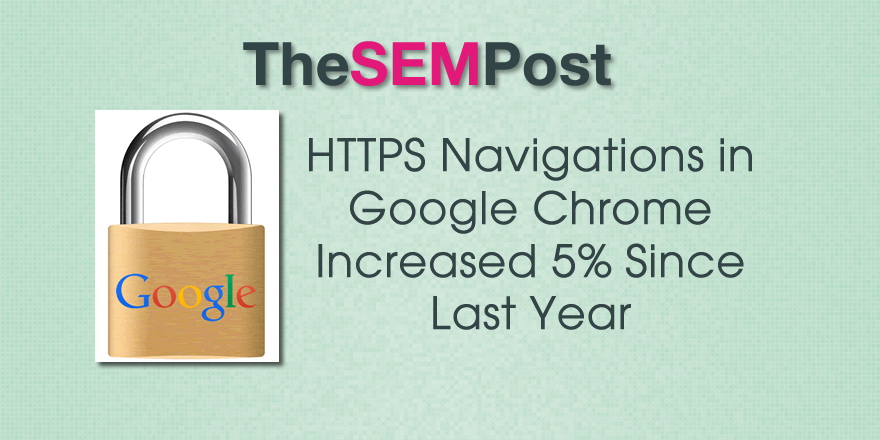 Google has been pushing hard on the value of switching to HTTPS.  With the announcement of the HTTPS ranking boost – which was really more of a tie breaker – it convinced many webmasters to make the switch from HTTP to HTTPS.

Ilya Grigorik, a web performance engineer at Google made the announcement on Google+ and Twitter.

over the past year the number of HTTPS navigations in Chrome has grown by ~5% (up to ~63%): https://t.co/9fksNNOLdD pic.twitter.com/NVrZCjrMD2

This matches a similar increase seen by The HTTP Archive within a few months of the announced HTTPS increase, and now they show a 10%  from this time last year for HTTPS requests.  So a different metric, but a solid increase as well.

Grigorik offers more details on the difference between the two numbers when he posted last year.

However, it’s important to keep in mind that HTTP Archive is counting unique origins, which does not account for the popularity of any particular site – e.g. a single origin, like google.com or facebook.com may be responsible for many more user navigations as compared to a site that you may visit infrequently.

Going HTTPS has been a bit more important for those in more competitive areas, since it can be the smallest ranking boosts that can make one site rank higher than another.  Gary Illyes from Google has also said they have plans to make it stronger, although that hasn’t happened yet.

Google has been pretty vocal about pushing for the entire web to be secure, so this shows that their efforts are having some effect, although I thought the numbers would have been a bit higher, not only as Google promotes it but with website owners becoming more aware of the benefits of going secure in an increasingly surveillanced world.

Google has released a new version of the Google quality rater guidelines, a year after the last … END_OF_DOCUMENT_TOKEN_TO_BE_REPLACED