You are here: Home / Twitter / What Marketers Can Learn From These Hashtags Fails 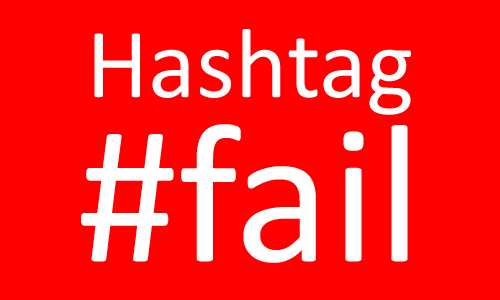 Hashtags can be useful for marketers in so many ways.  They can be used for conference events, for Twitter chats, for world events – pretty much anything that is interesting to either the world or even your market audience.

Unfortunately, there are still many marketers who don’t quite understand how hashtags can also result in hilarious fails…. fails that usually get picked up by the media if either the fail is large enough or the company is a large brand.

Here are some of the biggest hashtag fails and what marketers can do to ensure it doesn’t happen to them.

If you are a company that a certain demographic of people love to hate, skip the Twitter contests using the hashtag all together, because they will be hijacked – coining the term bashtag instead.  We hear repeated stories about brands coming up with an idea to ask people to tweet at them with a hashtag, but instead users will hijack the tag and use it as an opportunity to gripe about everything they hate about the company instead.

McDonalds was one of the first high profile brands who suffered bashtagging with their #McDStories.

NYPD tried to use a #MyNYPD hashtag to ask people to share their stories – but as you can imagine, it was used by people to complain about their treatment at the hands of NYPD instead.  Not only that, the related stories beneath their tweet told everyone how well it was going as well. 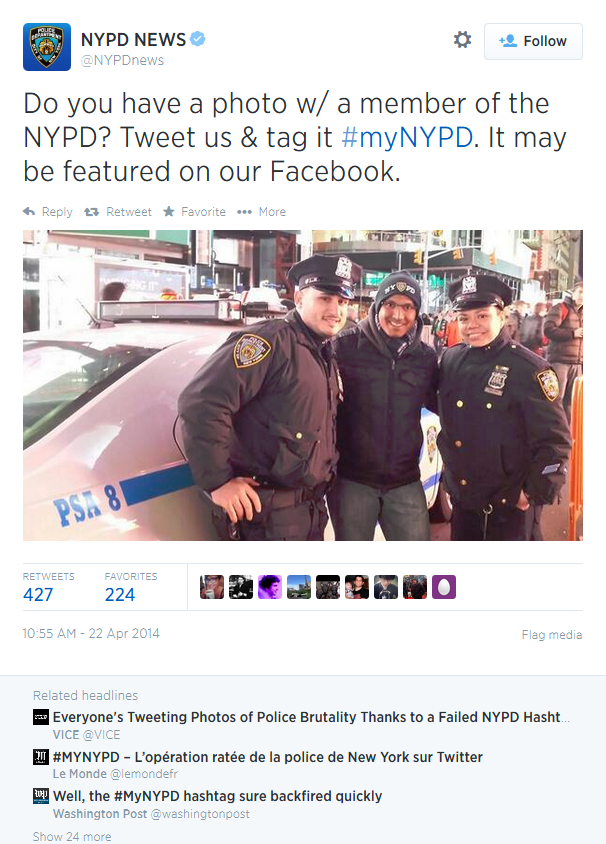 If you are a brand people love to hate, you might as well forget ever asking people to share stories with a #SpecificHashtag, because it won’t end well, and worse, the media will likely pick up the hashtag hijacking too.

Remember Susan Boyle who stunned audiences years ago for her performance of I Dreamed a Dream on Britian’s Got Talent?  Well her PR team definitely didn’t have talent when it came up with the #SusanAlbumParty hashtag, which might have gone largely unnoticed until someone realized it also spells out #SusAnalBumParty… not what one usually wants to think about when thinking of Susan Boyle’s singing. 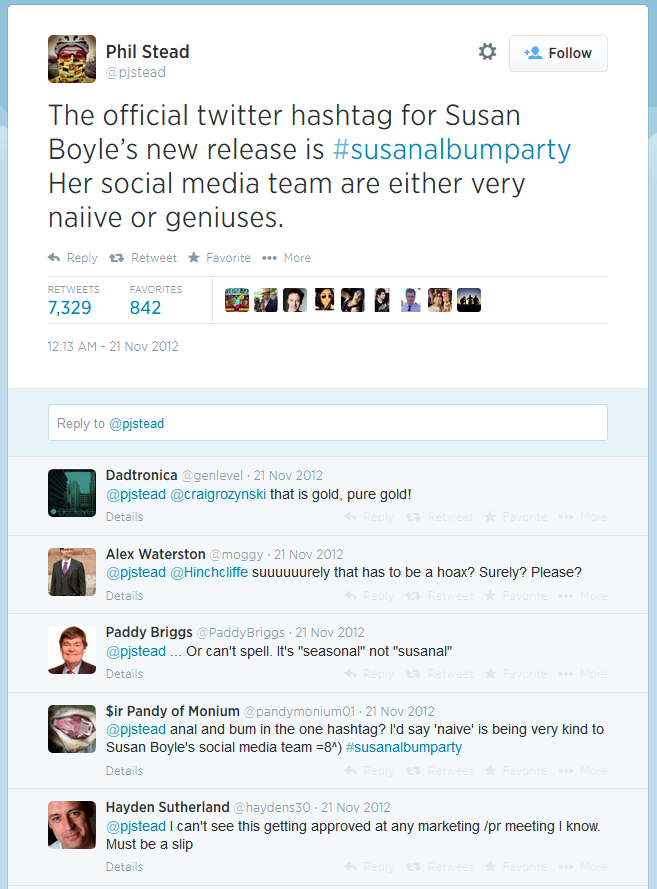 Before you start a promotion with a hashtag you want associated with yourself, a client or a brand, make sure that it can’t have unintended meaning when the capitalization is removed from words within the hashtag.

Check a Hashtag Before Hijacking it Yourself

Just because a hashtag is trending doesn’t mean you should blindly hijack the hashtag for your own marketing use without at least checking to see why it is trending.  If Celeb Boutique had simply clicked on the trending hashtag in the Twitter sidebar, they would have realized that it was in response to the horrific shootings at the Dark Knight Rises movie premiere.

But no, they decided the hashtag had to be about them and Kim Kardashian. 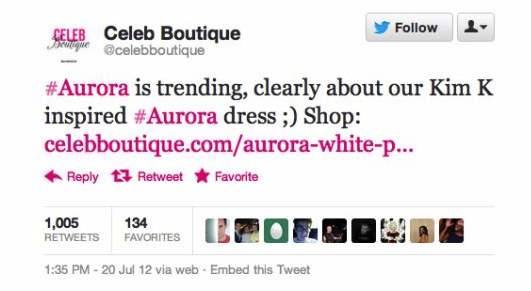 Not only that, it took an hour for them to remove the offending tweet, but not before it got retweeted and reported on in the media.

People hate spammers who try and market on trending hashtags.  News flash, those who see your spam attempts are not going to buy from you, they are only going to get angry you are spamming it.  A couple of years ago at SES San Francisco, a company set up an automated Twitter campaign to automatically spam the #SESSF hashtag every ten minutes, then didn’t bother monitoring all the @replies to them complaining about it. 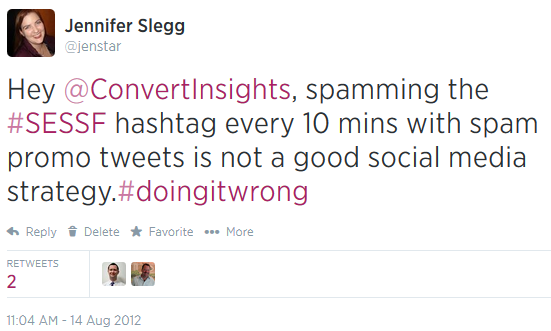 Just how bad was the spam?  Well over 100 tweets, every ten minutes, consisting of… 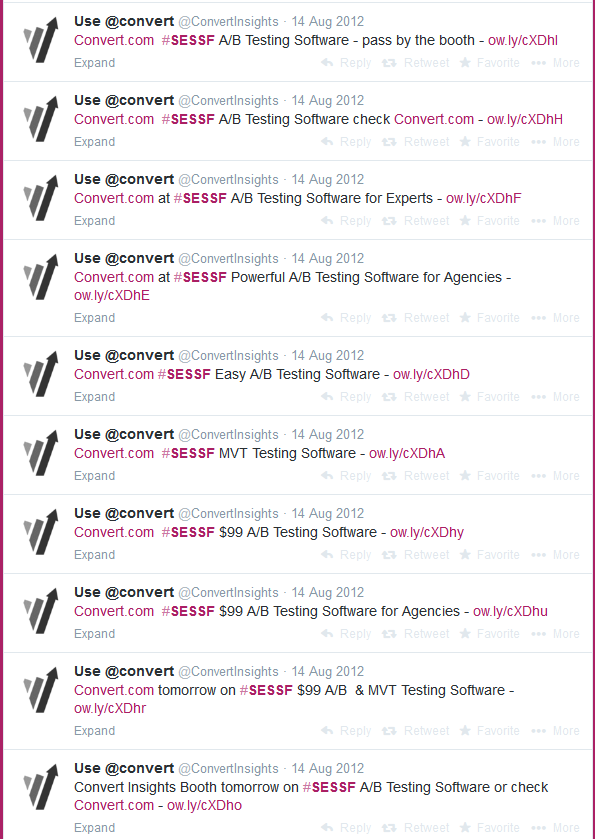 Just because you can turn every keyword into a #hashtag doesn’t mean you should.  Don’t use more than 2 hashtags in a single tweet – and especially not 8 as this spammy account is doing.

Also, if you are overusing hashtags, it looks spammy and users are much more likely to flag it as spam – especially if you do it with a trending hashtag.

Avoid Q&A’s For Those That Teople Love to Hate

Yes, Twitter Q&As can be a great way to have a conversation with interesting people on Twitter.  But if it is with someone people love to hate, you are better off finding another way to engage your Twitter following instead.

Case in point, the recent #AskThicke with everyone’s favorite adulterer who is attempting to win back his wife with an album filled with questionable subject matter he chose to name after her. 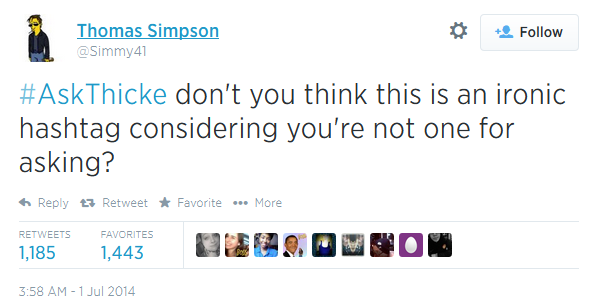 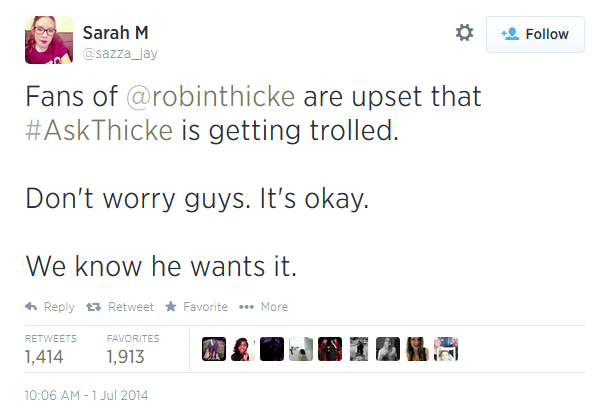 Want to read more hysterical responses with the #AskThicke hashtag?  HuffPo did a roundup of the best zingers.

If you want to use a trending hashtag in your tweets (after you have hopefully checked to see why it’s trending), make sure your tweets are at least relevant to the hashtag, and you just aren’t systematically tweeting identical tweets with a trending hashtag attached to it like HabitatUK did – especially when some of those hashtags are related to international political protests.

As much as Facebook wants people to use hashtags on Facebook, it looks out of place.  Just don’t.  Not to mention it actually REDUCES engagement on Facebook posts.  And their graph search doesn’t handle hashtag searches well at all.

There are a ton of brands doing an amazing job on Twitter with hashtags.

Google has released a new version of the Google quality rater guidelines, a year after the last … END_OF_DOCUMENT_TOKEN_TO_BE_REPLACED