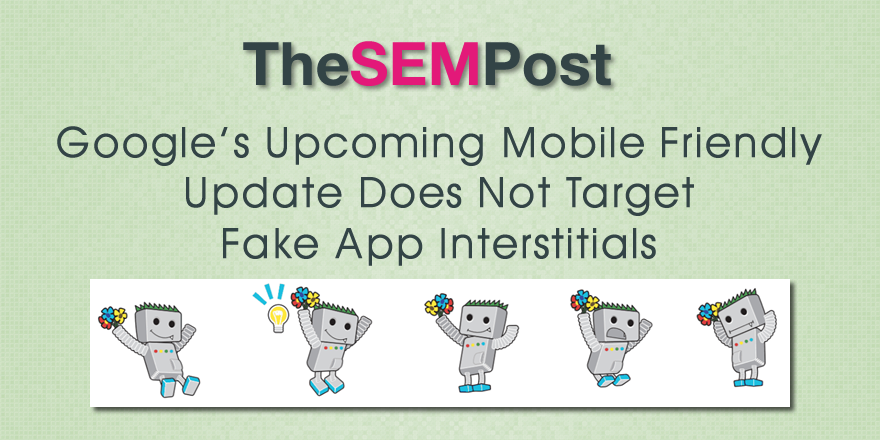 Yesterday, Google announced that they would be increasing the strength of the ranking signal for sites that are mobile friendly.  Google confirmed with The SEM Post that nothing else was changing with the mobile friendly update, it was only the strength of the signal that was increasing, but that didn’t stop some from speculating that Google is including something to target websites that are gaming the app interstitial rule.

@glenngabe it's not. I think we answered this question for SEMPost, tho it was in another form @googlewmc

When John Mueller discussed this previously in a Google Office Hours hangout, he said that they are looking into it, and considering manual actions against sites using this tactic to still serve app interstitials while keeping their mobile friendly ranking boost.  But the mobile friendly ranking signal does not have anything to do with app interstitials, other than sites are supposed to lose both the tag and the boost for using one.

So for those waiting and hoping Google targets sites using fake app interstitials, it won’t have any part in the upcoming increase to the mobile ranking boost.

Google has released a new version of the Google quality rater guidelines, a year after the last … END_OF_DOCUMENT_TOKEN_TO_BE_REPLACED