You are here: Home / Google / Google Increasing Mobile Friendly Ranking Boost in May 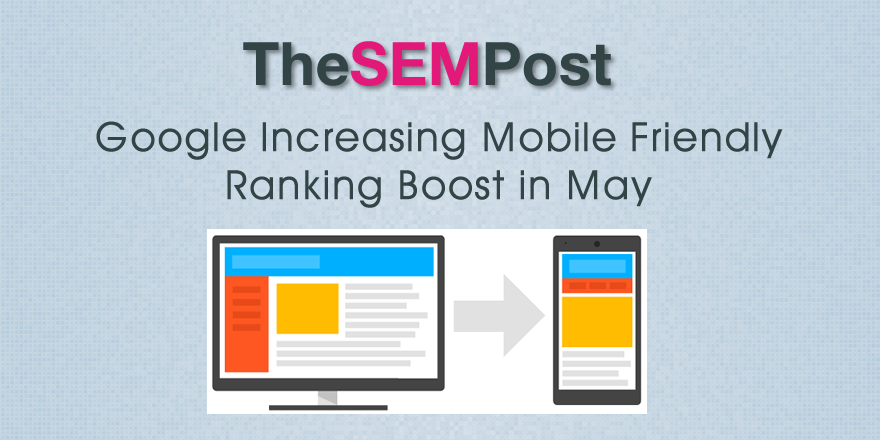 As a next step in our ongoing efforts to help users find more mobile-friendly content, beginning in May, we’ll start rolling out an update to our algorithm that increases the effect of the ranking signal.

An update to the mobile ranking algo isn’t a surprise as Google had previously commented that they expected it to evolve over time.  If anything, site owners had expected it to be updated before now.

But here is what we know about the increased mobile friendly signal for giving a boost in the search results.

Is Just the Strength of the Ranking Signal Being Increased?

When Google originally launched the mobile friendly algo last year, it was essentially a filter that applied to pages where a page was either mobile friendly or not.  If it was, it got the tag in the search results and the associated ranking boost, and if it wasn’t mobile friendly, it did not.  There were no other signals applied to it that would make a difference on how strong that boost was.

A Google Spokesperson has confirmed that this is still just the “mobile friendly or not” signal that is being increased.

Will Any Other Factors Increase the Ranking Signal?

While there have been hints made that perhaps page speed would be added to the mobile friendly signal at some point, it doesn’t appear to be yet.

“This is the same as the existing mobile-friendly criteria,” a Google Spokesperson said.

Any Other Changes Being Made That Affect Mobile-Friendliness of a Site?

A Google Spokesperson has also confirmed to The SEM Post that no other changes are being made that could cause a site to lose their mobile-friendliness.  So if your site is mobile friendly today, as long as nothing changes in the meantime, it will still be mobile friendly when the boost is increased in May.

In fact, the only real change Google has made in this area since they initially launched is that app interstitials now cause a page to lose it’s mobile friendly tag and boost.

There is always concern about whether a popular brand will still rank for their brand name, even if the site isn’t mobile friendly.  And it seems that Google is still taking this into account.

And remember, the intent of the search query is still a very strong signal — so even if a page with high quality content is not mobile-friendly, it could still rank well if it has great, relevant content.

After all, if someone searches for a specific brand name, they expect that brand name to come up first in the search results – or at the very least, as one of the top results.

A Google Spokesperson also confirmed that “Mobile friendliness is one of many ranking factors in search.”

If Google doesn’t serve that brand’s pages simply because it isn’t mobile friendly, then a user would think Google’s search results are bad because that brand wasn’t ranking where he or she could find it easily.  And if a user does end up on a brand’s site that offers a horrible mobile user experience, then it reflects badly on the brand itself, not Google.

Google confirmed that there are still no plans to bring it to tablets.  This is smart phone only.

When Will It Launch?

Google’s blog post says that it will launch in May, but it is unknown yet what the exact date will be.

According to a Google Spokesperson, “We do not have specific timing to share today but will follow up when we do.”