You are here: Home / Google / More From Google on Blocked CSS & JavaScript Warnings 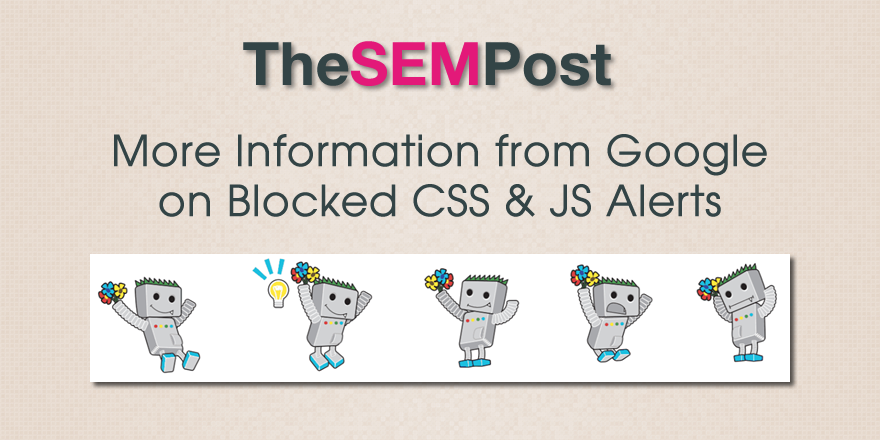 We have some more information about all those email alerts that Google Search Console sent to webmasters yesterday.

How Many Messages Sent?

@jenstar about 18.7% of that sent for mobile issues a few months back

This isn’t that surprising since many webmasters unblocked both CSS and Javascript at that time, to ensure they got the mobile friendly boost back in April.

It feels like the impact of these messages were a lot bigger.  But this could be because these ones imply a more immediate action is required while the previous mobile friendly ones were sent well in advance of the mobile friendly algo taking place, so they didn’t have the urgency factor on them.

But also the mobile friendly messages were sent in waves, while this blocked resources email seems to have been sent to everyone at once.

John Mueller also shared some more details about these letters.

Mueller says they are “primarily looking at the site’s homepage & for the smartphone view of the page.”  So definitely focus on your homepage first and have the resources for the homepage unblocked first.  But the good side effect of this is that often it is the same set of resources blocked for every page on the site.

While Google has previously said they are not concerned about third party resourced which most webmasters have no control over it.

We’re looking for local, embedded, blocked JS & CSS. So it would be for URLs that you can “allow” in your robots.txt, not something on other people’s sites.

However Third Party Blocked Resources Can Cause Issues

Mueller specifically points out where third party frameworks that are utilized for displaying the website can cause issues.

…Blocked content on other sites can cause problems too, eg, if you’re using a JS framework that’s hosted on a blocked URL

Google Does Not Index CSS or JavaScript

If you are concerned about CSS and JavaScript showing up in the Google search results or causing other SEO issues, Gary Illyes assured people that Google does not index either CSS or JavaScript.  So there is no reason to block either simply for SEO reasons.

How to Unblock Javascript and CSS

If you want the easy way to unblock your JavaScript and CSS, here is how to do it.

Mueller also comments that the messages weren’t as clear as they could be, and they are looking at reports on Google+ and Twitter on how they can improve it.  Even just including examples of the blocked resources would have gone a long way, as many were struggling to find what was blocked within their Google Search Console accounts.  If you are having trouble, here is how to find which CSS and Javascript files are being blocked.

Google has released a new version of the Google quality rater guidelines, a year after the last … END_OF_DOCUMENT_TOKEN_TO_BE_REPLACED