You are here: Home / Google / No, It’s Not Google Penguin But a Core Search Algo Update 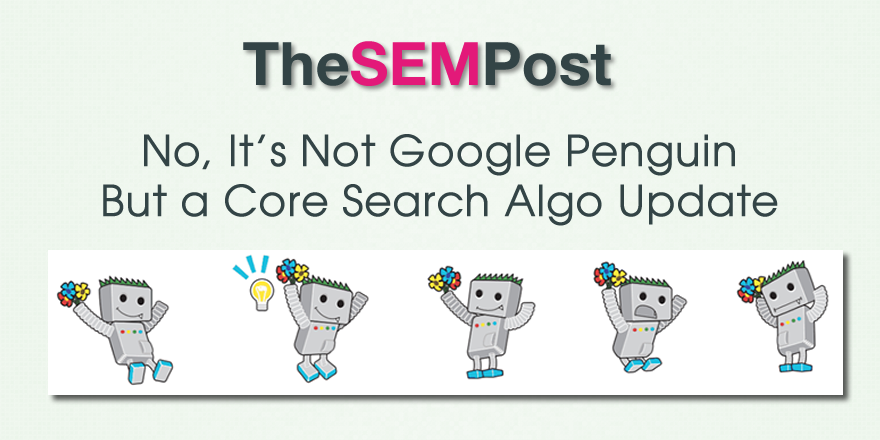 No, all those huge search result fluctuations we have seen since late last week are NOT Penguin, despite wild speculation that it was.  Instead, the changes we are seeing are a result of a regular core algorithm update.

Zineb Ait Bahajji was the first Googler to confirm (in French) that it wasn’t Penguin.

Translated into English, she is saying “indeed. It is not Penguin.”

I also asked Gary Illyes from Google to confirm in English that my French translation skills were accurate.

@jenstar yes, the changes you saw are part of a core algo update. @Missiz_Z is right almost always, you shan't need my confirmation

@methode I wasn't questioning @Missiz_Z being right or not, merely my rusty French skills translating it 🙂

While it is not a surprise to some, others were quite adamant that this search result fluctuation was actually a result of Penguin, since we are expecting the new Penguin realtime update to happen sometime in the near future.  But those who were tracking Penguin hit sites that should recover in the update weren’t seeing any indications it was Penguin from the beginning.

Google makes hundreds of changes to the core ranking algo and some have a stronger impact in the results than others do.  But many SEOs automatically think that any large fluctuations are the result of Panda or Penguin (and arguably get too caught up that Panda and Penguin are the only thing to focus on), especially when we are due for an update.

So these recent changes are definitely not Penguin, but we don’t yet have a better idea of when we will see Penguin, other than soon.

We finally have the first Google Quality Rater Guidelines update of 2022, and like usual, it is … END_OF_DOCUMENT_TOKEN_TO_BE_REPLACED