You are here: Home / Google / In PPC, What Was True Then May Not Be True Now 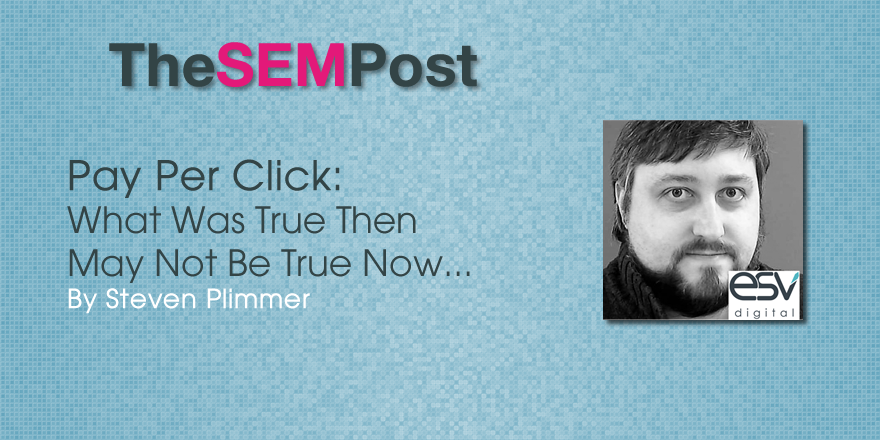 In all the different areas of performance marketing, such as SEM, RTB and Remarketing, things change so quickly that writing off a strategy or tool for good – or, indeed, singing the praises of a tool or strategy – will eventually be based on dated information.

Take an example like the GDN (Google Display Network – where you deliver banners and/or text ads on participating websites). Many advertisers may have tried it six months or a year ago (or more) and found it hard to use or simply not efficient enough for their needs. They’ve shelved it and written it off as a waste of money.

However, in recent months, we have seen a raft of new developments on GDN both in management and reporting. In the last 6 months the GDN has added:

This is just one corner of PPC and its development since July last year and you can see many major changes, which could fundamentally alter the performance of your GDN marketing efforts.

If you had written off GDN as a money pit or too impenetrable or hard to control, maybe another go round is in order now?

What it all means


PPC is, at its core, a testing occupation (I don’t mean challenging in this instance, although that does apply!) in that you cannot assume an outcome without ever trying something out. In the case of having tried it and getting a negative outcome, if a significant set of material changes are made to the infrastructure on which the original test was built, it’s sensible to go back to the well and have another taste test.

Ultimately, it boils down to not leaving money (revenue) on the table unnecessarily just because you were burned in the past. Competing advertisers are likely to give it a try and you’ll be left looking flat-footed if they do well with it and take market share.

So, although, this is a tech-based industry, looking back and revisiting an “old” ad approach could pay off if you are careful. Do you have a story that follows this narrative in your own experience? Let us know in the comments.

Senior Account Manager & Analyst at ESV Digital
With a decade of PPC experience, Steve hails from the UK and has been with ESV Digital since 2011 but has been working in the US for them as Lead US Analyst and Senior Account Supervisor since 2013. When not building Excel templates, and the like, he is either absorbed in all kinds of subjects from science, current affairs, technology and the arts or he’s traveling.

We finally have the first Google Quality Rater Guidelines update of 2022, and like usual, it is … END_OF_DOCUMENT_TOKEN_TO_BE_REPLACED