You are here: Home / Google / RankBrain is For Understanding Queries, Not for Crawling or Replacing Ranking 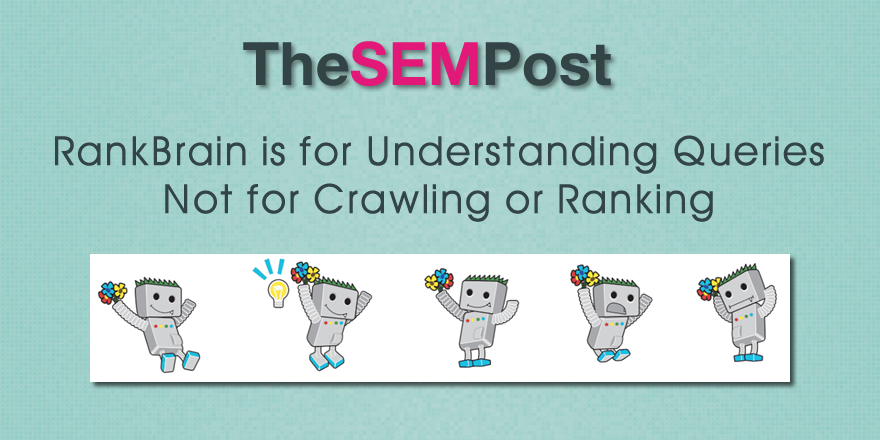 Ever since RankBrain first launched, there has been a lot of confusion over how exactly it impacts SEOs and site owners.  While we know it has a greater impact on search queries that Google has never seen before, Gary Illyes from Google has cleared up some of the more popular misconceptions about RankBrain and how it affects some areas popularly connected to RankBrain such as crawling and ranking.

Lemme try one last time: Rankbrain lets us understand queries better. No affect on crawling nor indexing or replace anything in ranking

The understanding queries part is well known right from the initial RankBrain launch.  John Mueller was asked just this week about RankBrain and its relation to crawl budget, and he also confirmed RankBrain does not impact crawl budget either.

RainBrain is also particularly good at dealing with the 15% of search queries Google hasn’t seen before.

@MotyMalkov that's the whole point of a ranking change. Now you can actually rank for queries like [can I finish super mario WITHOUT help]

He also clarifies that this means RankBrain helps on the types of negative queries that Google doesn’t often see.

@randfish I meant any ranking component. It does change ranking, e.g we're better at getting relevant results for negative queries

@randfish to the best of my knowledge that's the case, yes. (I am on the search quality team, but not rankbrain, so I don't know EVERYTHING)

This is pretty important, and many seem to be missing it.  Illyes is saying that RankBrain isn’t making up any of its own algo signals – something many are wrongly assuming RankBrain does – when it is handling these types of queries, but it can weight existing signals to understand and answer queries better.

Illyes also said something similar to this once RankBrain became known, that RankRrain is not continually learning.  And machine learning expert Jack Clark also said RankBrain is periodically re-trained, but it’s not learning on-the-fly. So it seems much less a factor in creating ranking signals, something many SEOs have been speculating recently.

We finally have the first Google Quality Rater Guidelines update of 2022, and like usual, it is … END_OF_DOCUMENT_TOKEN_TO_BE_REPLACED