You are here: Home / Google / RankBrain Might Not Be the Third Most Important Ranking Signal 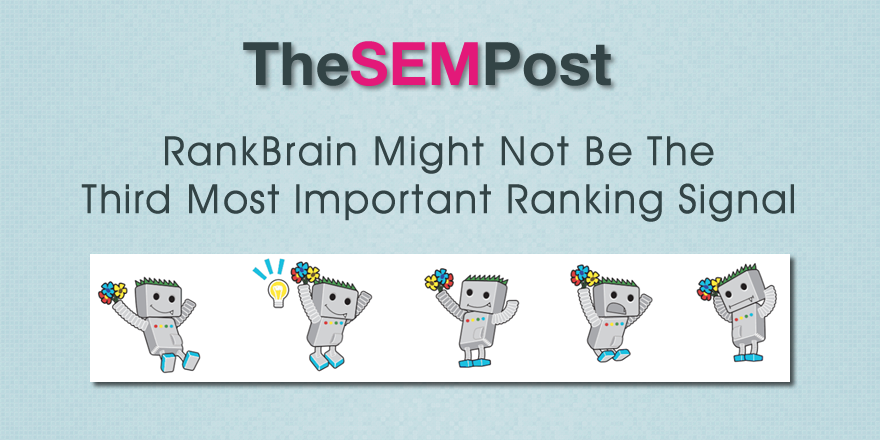 Hot on the heels of Google finally revealing the top 2 ranking factors, Andrey Lipattsev, Search Quality Senior Strategist at Google also dropped another interesting piece of information… Google RankBrain might not be the third most important ranking signal after all, a figure Google stated when RankBrain was first publicly confirmed.

Now, part of this isn’t that surprising.  After all, RankBrain doesn’t have the same impact on all queries, since we know it has the largest impact on those 15% of queries that are brand new to Google.  When Google originally announced RankBrain, a Google Spokesperson confirmed with The SEM Post that “It’s especially helpful on long-tail queries, such as the 15% never seen before each day.”  So it could be the case where it could be the 3rd most important ranking factor for some queries, while it is significantly weaker for highly competitive keywords that are seen regularly.

During the hangout, immediately following Lipattsev’s comments about content and links being the top two ranking factors, he addressed the position of RankBrain, which Google had previously said was the third most important ranking factor.

And that third place is a hotly contested issue.  I think, it’s a funny one.  Take this with a grain of salt.

Even with a grain of salt… the comment that it might not actually be the third most important factor of course raises the question of what signal or factor is in that #3 spot if RankBrain doesn’t happen to hold it? And if it took so long for Google to confirm the first two, chances aren’t good Google would confirm others as they go down the most important ranking factors list.

While it is an interesting factoid, it will definitely cause more confusion and speculation by the SEO community, especially in a time when there is already a lot of RankBrain misinformation being circulated.  And since Google is wanting to rank quality websites with high quality content at the top of the search results, does it really matter in the long run if RankBrain is #3 on the important ranking signals since SEOs are really limited on what they can do for RankBrain?

Lipattsev also talked about the impact of RankBrain, following up on the tweets that Gary Illyes from Google made earlier this week.

I think, you know, obviously.  I have to correct the phrase he chose when he was doing it, and I understand where he was coming from, being somebody who worked on that.

Then he talks of using an internal debugger tool at Google that shows what Google algos are coming into play for specific search queries.  He can see how much of an impact RankBrain is having on specific queries.

The way I interpret his meaning, if you look at a slew of search results, and sort of open up the debugger to see what has come into play for such-and-such a query, for such-and-such a page, some things pop up more or less often, so certain elements of the algorithm come into play for fewer or more pages in fewer or more cases.  And yes, if you do that, then you will see elements of RankBrain having been involved inhere, in rewriting this query, or applying it like this over here.  You know, I see this two times as often as the other thing, and half as often as the other thing so it’s somewhere number three.

It’s not like having three links is X important and having five keywords is Y important and RankBrain is some Z factor that is also somehow important that you multiply all of that, that’s not how this works.

I think that the way we can look at it in a useful way is that we are trying to better at understanding natural language and applying machine learning and say okay what are the meanings behind the inputs.   In particular when you think about the fact that when it’s early days we cannot claim that typed queries, whether mobile or desktop, have reasonably subsided and are going away.

But more and more so people are interacting with their device using voice, so we can expect the use of stop words, and words like Gary mentioned, without, maybe other operators of this kind, a lot more often than you would.

Because people still tend to be a lot more mechanic or overthink, at least I do, I tend to what is a query that is completely non-human in nature, that sounds like a machine would understand, let me type it. I don’t know if you guys catch yourselves doing it, you don’t generally type a question to Google as you would ask a real person.

At the end of the day, RankBrain is still just one of many signals, whether it is the third strongest one on never-before-seen queries, or if it gets bumped down the list depending on the query.  It is not something that SEOs can control or make a SEO marketing plan around.

SEOs should still be focusing on all the ranking factors to make the highest quality website for users, rather than only focusing on the couple signals deemed “most important for SEO”, for best success in the search results.

Google has released a new version of the Google quality rater guidelines, a year after the last … END_OF_DOCUMENT_TOKEN_TO_BE_REPLACED