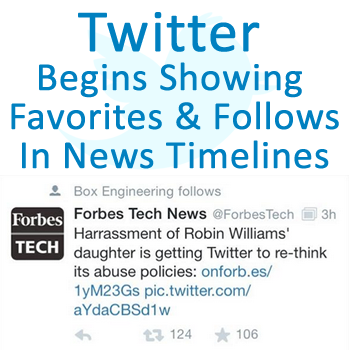 If you have wondered why you are suddenly seeing when someone has followed someone or favorited a tweet in your news timeline, you are not alone.  Twitter has stepped up their testing to show follows and favorites of people you follow in your timeline.

In this example, two of the three items visible on the screen are follow alerts, while the third is a retweet.

Twitter filling my feed with stuff I didn't ask for – stuff other people follow and fav. pic.twitter.com/IVOViGF1QW

It does not seem to be promoted tweets or promoted follows at this time – or if they are, Twitter isn’t disclosing it.  But showing up in news timelines is annoying people.

From a marketing perspective, it is a good thing.  If you get many people following you or if you tend to get people favoriting your tweets more than retweeting them, it means you will get a lot more exposure of your account and tweets than you might otherwise.

However, its would be likely that Twitter will end up monetizing it, and in a slightly less obtrusive way than how Twitter currently promotes tweets and accounts and it could prompt more action from those who see it, since the person they follow would have very recently interacted by following or favoriting.

It is unclear how frequently Twitter is doing this, as it isn’t doing it to all follows or favorites, only select ones.