You are here: Home / Twitter / Twitter favorites & follows only show in timeline when no updates twice in a row

When Twitter began showing favorites and follows in the Twitter timeline, there was a lot of confusion about why this would trigger.  Some users were seeing it consistently, while others weren’t seeing it at all.

According to a tweet by Twitter CEO Dick Costello, Twitter will show favorites (and presumably follows, which I also verified) when a user pulls down to refresh Twitter on a mobile device two times in a row without any updates.

@YS @mjbiren you get favorites when you pull-to-refresh 2x and we have no new tweets from follows both times.

This also explains why some users were seeing the feature, while others were not, since those with lower numbers of people they follow are more likely to see favorites than those who have very active news feeds.

As The Verge points out, the change was likely made so that newer Twitter users would see some sort of activity in their feed, especially if they have only followed a small number of people.  As with any service, if someone tries to update something several times and doesn’t see any noticeable change, they won’t see the value in the service.

I wasn’t able to see favorites or follows in my timeline before, however when I refreshed twice in rapid succession, I did see a following update, which was a non-sponsored (or at least not labeled as such) because Steve Hammer (coincidentally also a site contributor) follows @Wired . 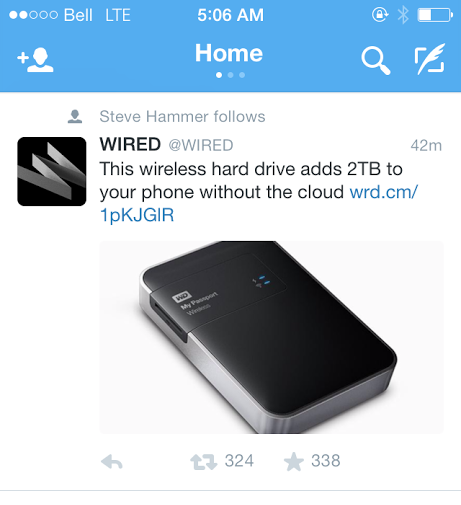 From a usability perspective, it is actually a pretty smart thing to do, especially for newer Twitter users.  However, it is unfortunate that savvy Twitter users can’t turn off this feature if they want.

Google has released a brand new version of the Quality Rater Guidelines, the third one this year.  … END_OF_DOCUMENT_TOKEN_TO_BE_REPLACED