Last month Twitter began embedding linked tweets for both the iOS and Android Twitter apps.  Now, the change has moved to the desktop web version of Twitter.

On Sunday I noticed an amazing Twitter exchange between William Shatner and NASA, and decided to not just retweet it but also comment on how great the exchange was and linked to the Twitter reply.  When it was posted, instead of showing a link to the tweet, it embedded it instead. 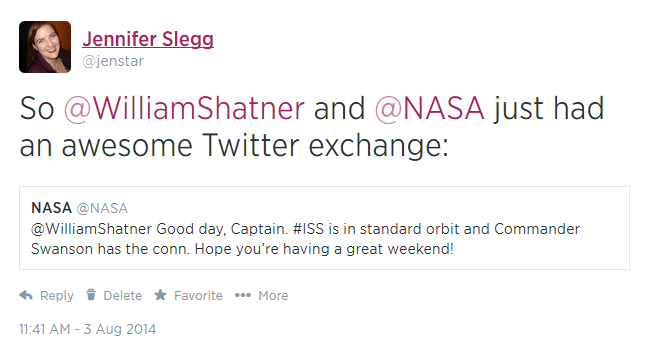 It also embeds the tweet when it is displayed in a user’s news stream, so it shows the tweet linked to, as well as the tweet content from the person who is linking it.

For marketers, this could be used to promote others content better by linking to a tweet rather than doing the traditional retweet.  This way you can make your own comment using more characters as well as have all the content from the tweet you would have retweeted otherwise.

Google has released a new version of the Google quality rater guidelines, a year after the last … END_OF_DOCUMENT_TOKEN_TO_BE_REPLACED