You are here: Home / Google / What Do These Google AdWords Features Really Do? 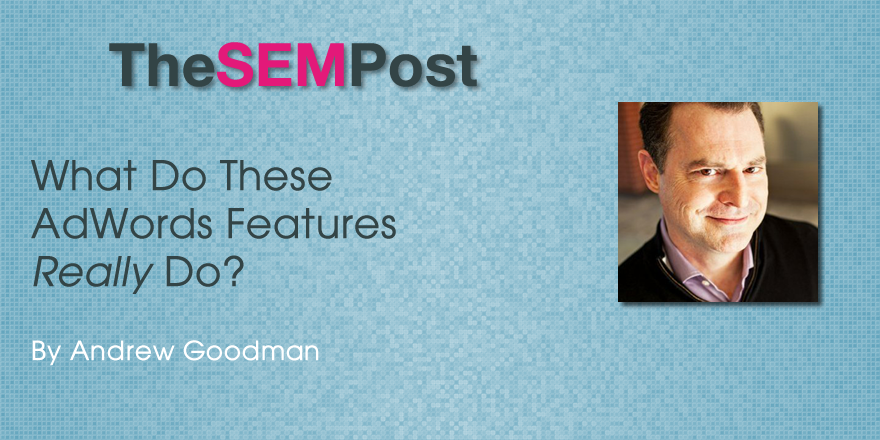 There are tens of thousands of PPC account managers out there today, which has led to a surprisingly wide range of account strategies. Can they all be right? If you’re an opinionated PPC pro like myself, you’re bound to think someone else’s theories are, well… weird. That bias being acknowledged, let the sparring begin!

Even some of the more thoughtful professionals in these ranks have been known to blithely enable a range of tough-to-fathom default settings and black box features. Google’s documentation for many settings and features is notoriously opaque. With so many folks using certain Google-approved settings, the contrarian in me suggests that doing the opposite might offer more efficiency or opportunities for optimization.

Whether deliberately or simply by a more Darwinian process of ideas that seem to “stick” with the platform-using public, you wonder if we are falling for certain features so enthusiastically because of how they are named (or as I would have it, framed). A psychological frame can go a long way towards lulling us into doing something that isn’t in our interest.

Let’s move past obvious settings like ad rotation. If you want to optimize for clicks (or conversions) instead of rotating and testing ad creative on your own, I can’t stop you. But at least the choices are reasonably clear. (Then again, optimizing for conversions has its own drawbacks – eg. garbage in, garbage out – but you knew that already.)

Here are a few “straightforward” AdWords settings that appear to be anything but.

I’ve revisited the rationale behind this setting numerous times, and I can’t see anything but a niche use case for advertisers who prefer to bias their clicks during the early part of the day, to ensure that a fixed budget (one that does not exceed the available inventory) is spent each day. That’s not entirely crazy. Some advertisers convert worse in the evenings.

If you try to work out how this feature should work, an advertiser with a very high set campaign budget (one that will not be exhausted no matter what) should nonetheless see full delivery of their campaign in keeping with the impression share they merit across all eligible queries that day, vis-à-vis their Quality Score, normal impression management in the AdWords system, etc. So the Accelerated feature would only come in handy for an advertiser who (a) has a set daily budget set below the available daily spend (below what the available query inventory would have them spend if they turned up the budget) and (b) doesn’t want to spend too little (or simply prefers to spend that day’s budget before they head out for Agency Happy Hour) as a result of AdWords’ practice in Standard Delivery of attempting to apportion clicks throughout the day for a campaign that has throttled its budget.

From where I sit, that’s a pretty trivial setting, and also unreliable as compared with other ways of handling it. So why do so many advertisers keep this feature on? And did you know that you cannot turn it off if you are making use of the convenient Shared Budgets feature (bundling your whole budget across multiple campaigns instead of setting campaigns separately)? All of this sends off alarm bells to me. Any feature that subtly suggests it will “help you spend your budget faster” opens up an assumption that the normal auction rules may not apply. Will you be left with higher CPC’s and worse ROI if you use this feature?

One agency decided to test it. The results are clear. Their CPA’s were substantially better using Standard delivery. Yes, the tortoise beat the hare.

So is the feature useful to most of us? I will say no. At best, a lot of people are using a feature that does nothing, or that they don’t understand. “Accelerated,” as I understand it, is not a way to somehow increase available click volume for the same account.

The performance of Standard vs. Accelerated delivery isn’t super-easy to test, given that you cannot run an A/B test of a feature like this. But I encourage us all to run tests to try and gauge what the impact seems to be, if any.

Is Enhanced CPC the Frosted Flakes of PPC? Are these clicks just “Grrreat” in the sense of being cleverly packaged? Or is there bona fide nutrition in there?

The documentation says it will use data (including your conversion history) to bid up to 30% higher to compete harder for clicks that seem more likely to convert. More interestingly, Enhanced CPC “double-checks itself” by leaving a portion (you don’t control the portion, of course) of your clicks to your normal bid patterns. If Enhanced bid patterns actually perform worse, the system will adjust, in theory leaving you no worse off.

If this is all true, this is probably an awesome feature, and you should use it. But in environments with limited data, it may have a limited or even negative effect.

Ultimately, it’s a black box. If a particular group of engineers have determined that certain kinds of data – browser version, time of day, etc. – are salient in terms of predicting outcomes, as a company owner or PPC strategist, I’d like the right to disagree. What if we already have our own (and better) take on time of day data? What’s the secret sauce doing that I might not do? We don’t know.

Wouldn’t it be nice, if the system was using demographic information, we as advertisers were given the control and data in that area? “Just trust us, we know a lot of numbers” isn’t a reassuring stance coming from a vendor that stands to profit from your click costs.

Moreover, my hunch is that when such black boxes are working with insufficient data, they have to be calibrated one way or another (aggressively or conservatively). Got volume problems? It could be that Google anticipates more complaints about aggressively-calibrated Enhanced CPC than a conservatively-calibrated version, so they’ve settled on a conservative version. (They know you’ll just crank up CPC’s if you like the performance.) To claim that there is no aggressive vs. conservative continuum in this realm, that the clicks are just “better for you,” would be a snow job – there can be and likely is a bias affecting your ROI and/or your volume.

At least, unlike Conversion Optimizer, it works in concert with other forms of bid management, along with your various bid adjustments. That makes it flexible and keeps you somewhat in control.

If you get quite satisfied with the long-term performance of a campaign with a large dataset to work with, I would certainly give Enhanced CPC a test. But I’d caution against using it blindly.

Ahh, the holy grail of business growth. A tool that gives you conversions at a price you determine. No messing with bids, optimization, and strategy! Just get customers! No risk! Set it, and forget it. As you too have no doubt noticed, especially if the conversion events are difficult to come by (sales with good average order values, tough-to-generate leads), it’s not going to be that simple. If you give a blunt tool (or a lazy person who nonetheless acts very rationally) a challenge with specific constraints that are near-impossible to meet without more detailed optimization, it’s just possible that the constraints will be met by taking certain shortcuts, essentially the “only ways” to meet the constraint.

The primary method to hit a tough constraint is to cherry-pick – take only the safest bets, but don’t improve the account. The result will be low volume, which is a threat to business growth.

But if you loosen that constraint a little? The technology isn’t picky about how it meets your target. It certainly won’t be motivated to exceed it. Essentially, like a lazy but highly rational account manager, the tool developers have every reason to:

This combines cherry-picking strong exact match keywords (or, ugh, brand query in some cases), and then blending that stellar result with some inaccurate and profligate bidding strategies on other keywords. This “blended” version of success may be “just good enough,” and does not compare favorably to full optimization.

I’m not the only one who is skeptical of Conversion Optimizer. Third-party vendor Acquisio has recently come out with a comparison between Conversion Optimizer and their version of similar technology, Bid and Budget Manager.  I don’t believe any silver bullet is perfect. But it’s nice to see there is at least competition in the industry – both in the realm of ideas, and in the realm of features.

When we’ve done an intervention and turned off the addictive Conversion Optimizer – for example, when taking on a new client – we’ve tended to observe a short-term hit in ROI, but then we have the control to buckle down and optimize relentlessly. Volume tends to improve substantially as a result, and ROI comes back into line.

As hard as these ideas are to definitively test, I hope you’ll test them anyway, and share your results in print and at industry events!

Of course, these kinds of mundane details won’t matter too much to the visionaries of the world looking over the horizon for the next paradigm shift in information retrieval and consumer empowerment. No one’s going to be asked to do a TED talk for improving ROI 20% through contrarian PPC strategies. As a retired math professor recently pointed out to me: “That’s just the business side.” Just the business side, indeed.

I’ll be talking about such rough-and-ready experimentation at the upcoming SMX Advanced conference in Seattle, on the Mad Scientists of Paid Search panel.

Google has released a new version of the Google quality rater guidelines, a year after the last … END_OF_DOCUMENT_TOKEN_TO_BE_REPLACED