You are here: Home / Google / Why Google Decided to Delay Penguin Until the New Year 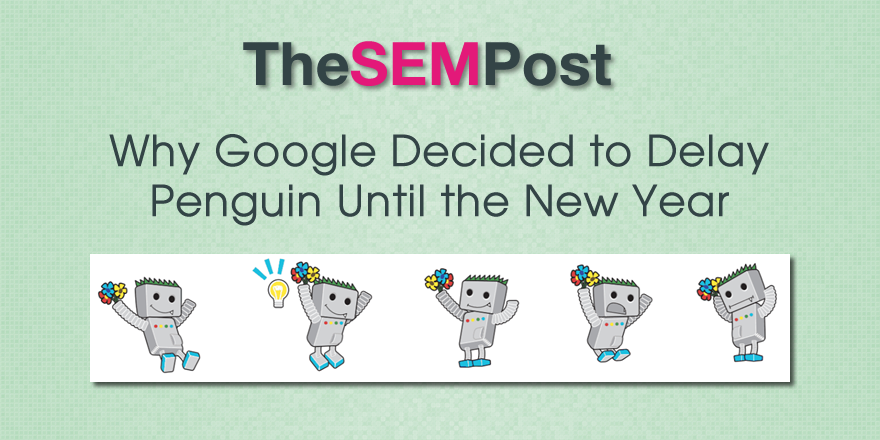 We just recently were talking with the engineers recently to try and figure out what the plan is, how we should kind of plan our time around that, and its looking like it’ll probably going to be towards next year. So we try not to launch too many things towards the end of the year just because there are fewer people here to kind of take action were anything to go crazy.

So that’s kind of the buffer that we had, and instead of pushing it towards the end of the year where we might not be available in case something comes up, we’d like to have it during the time where more people are around to actually resolve things if there are problems.

He was also asked if there was a new potential date for when it would run, and he refused to say specifically.

I’m not going to say anything with regards to dates.  I’m pretty confident, but like always if things are more than maybe a week out, then it’s really hard to say what all could happen in that time.  I’m not going to say anything, I’m going to hope for the best.  Obviously we are in touch with the teams that are working on this to try and make sure that it works in an optimal way and also that we have something that we can tell you guys when things are ready.

It is no secret that the SEO industry takes any dates about upcoming algos very seriously, and there are some that tend to get pretty angry if it doesn’t happen exactly when a Google rep – usually Gary Illyes or John Mueller – says it will.  For example, Gary Illyes had commented earlier this year about Panda coming in 4-6 weeks, and when it was pushed back for technical reasons, many were pretty vocal about their displeasure, particularly on Twitter. But there are those who like getting the heads up, even if it doesn’t happen to the day someone from Google says it will –  many view rough estimates as better than “Surprise! Panda/Penguin/whatever is here!”

We finally have the first Google Quality Rater Guidelines update of 2022, and like usual, it is … END_OF_DOCUMENT_TOKEN_TO_BE_REPLACED