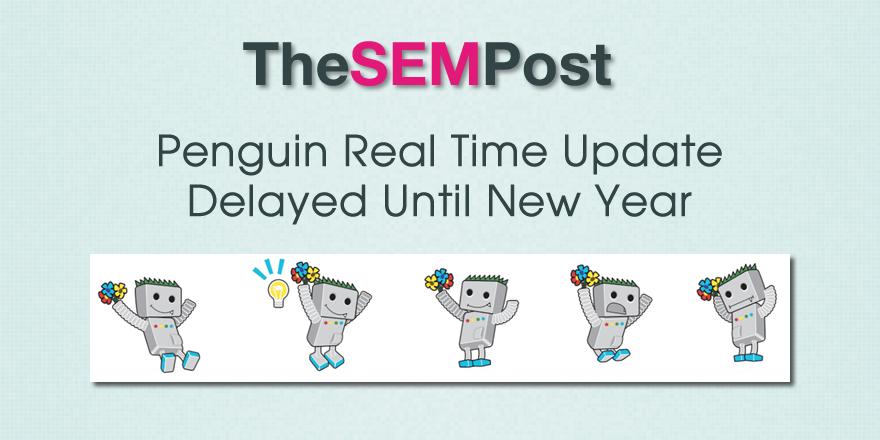 If you have been waiting for Penguin to be updated, you will have to wait a little bit longer.  Google has delayed the Penguin update until the new year.

Many SEOs have been wondering when Penguin would be updating, especially since there hasn’t been a Penguin update since October 2014, and it was believed that Penguin would go live before the end of the year.  But as it started getting closer to the holidays, some were wondering whether it would happen in the midst of the holiday rush, or if Google would wait until the new year after the holidays.

A Google spokesperson sent us the following statement:

“With the holiday’s upon us, it looks like the penguins won’t march until next year.”

Many Googlers take vacation this time of year, including Gary Illyes who is often relaying Penguin info, but Illyes had also said they wouldn’t release an unfinished algo.  If there is some good news about the delay, it also means SEOs won’t need to be doing Penguin analysis for clients during the holiday season too.  And those still working on cleaning links up, you have a bit more time to get those disavows done.

So we can start the Great Penguin Watch once again in the New Year.

Google has released a new version of the Google quality rater guidelines, a year after the last … END_OF_DOCUMENT_TOKEN_TO_BE_REPLACED