You are here: Home / Google / YouTube Begins Autoplaying Next Videos Instead of Just Displaying Recommended Videos 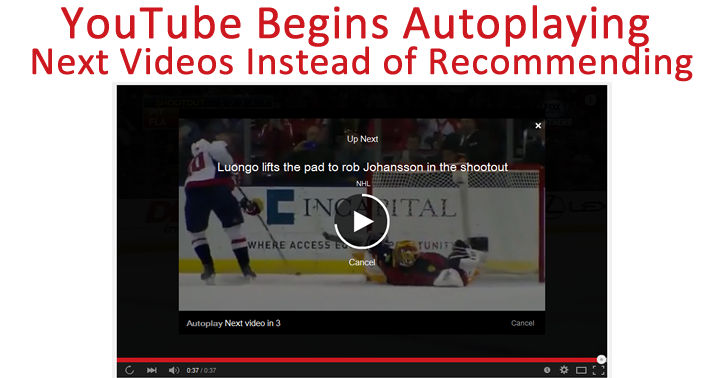 The same day that Facebook announced they were serving 3 billion video views daily, YouTube has made a change that will significantly increase the video views on their own platform. Starting Wednesday, YouTube has turned autoplay on to begin streaming a new video seconds after the previous one finishes.

Until now, subsequent videos would only autoplay if the video happened to be in a playlist. If it was a standalone video, users would see the typical screen that would show multiple options of other videos that the user might want to watch next. But it would not automatically start any of them and less the user engaged with its and clicked one of the options to play.

With this new change, videos will continue to play infinitely, which will bring a huge boost to the number of videos viewed on YouTube. There’s many times that someone will watch a video and leave it open a tab, even though there’s no intention of watching another one at that time. But now YouTube will just keep playing related videos automatically.

The new videos will start playing after 10 seconds, giving users an option to click something else or close the tab.  This is very much in the successful style of Netflix that results in people binge watching TV shows for hours as the next episode constantly autoplays to tempt the viewer to watch.

There is an option to turn off the autoplay. It’s a new feature that shows up on the top right hand side of the screen above upcoming videos. So you can toggle it on and off you notice it and don’t want this new autoplay feature.

They have also added “Next” and “Previous” buttons to YouTube videos so users can easily go back and forth between videos that autoplay.

With the timing of this change, it seems directly related to Facebook’s announcement. Facebook has been pushing their videos aggressively as they try to convince users to upload videos to their platform and to cut YouTube out of the loop. And because YouTube makes significant revenue from advertising on YouTube, this should also not only increase ad views for advertisers but make more inventory available.

We finally have the first Google Quality Rater Guidelines update of 2022, and like usual, it is … END_OF_DOCUMENT_TOKEN_TO_BE_REPLACED