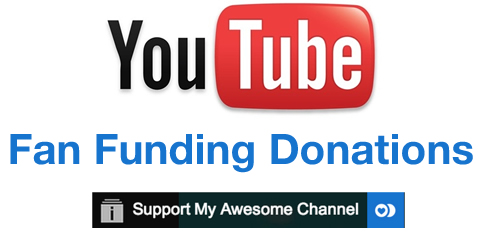 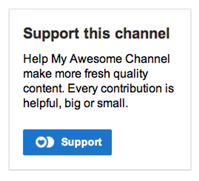 YouTube was rumored to be adding a “tip jar” for donations as part of their features they were adding for YouTube page owners.

This is one of the features that Google is helping those on YouTube who have created a large fan base to make more money outside of the advertisements that display or pre-roll on their YouTube videos.    The new donations feature is only available in four countries at this time – US, Australia, Japan and Mexico.  And this means that both the owner of the YouTube channel plus those who want to donate must be in those countries. However, they are planning to open up more countries in the future.

First, it is currently in beta, so you need to sign up to be a beta tester here.

YouTube does have a list of requirements that users must also meet in order to be a beta tester.

To be eligible for Fan Funding, you must meet these requirements:

Visit the status and features page on your channel, and you will see a button next to the “Fan Funding” option which you need to enable.  However, you will only see it if you are in the beta test at this time.

Competitive reasons for the change?

The timing of the introduction of fan funding is interesting.  The first hint of it began when Google was rumored to be acquiring Twitch.tv, which eventually ended up going to Amazon instead.

Twitch.tv has long had a subscriber feature, which gave subscribers to individual channels extra perks such as icons and an ad-free stream when watching the user they subscribed to.  It has been a popular program, although many people to complain it is hard to get status from Twitch to be able to begin soliciting donations.

YouTube Creators, a popular resource for those creating YouTube videos and those building fan bases on YouTube, released a series of top tips and strategies for gaming channels, added to their site hot on the heels of Amazon aquiring Twitch.tv.  So it does raise the question of whether Google is trying to up the ante to attract even more gamers, and possibly offering their own live streaming for gamers.

Google has released a brand new version of the Quality Rater Guidelines, the third one this year.  … END_OF_DOCUMENT_TOKEN_TO_BE_REPLACED