Bing Ads is testing a new ad extension called Twitter Annotations which displays the number of Twitter followers each advertiser has. 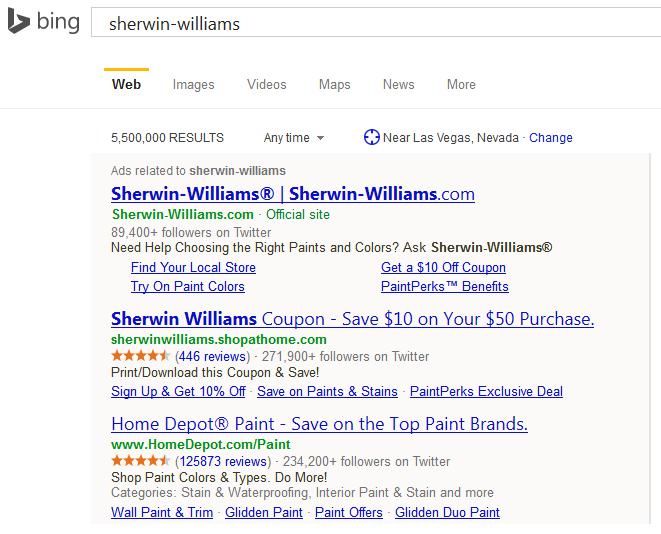 The Twitter Annotation appears below the title and URL of the Bing Ads top ad unit in the search results, or for those who are also utilizing ratings, it appears to the right of the ratings.  It only seems to appear in desktop ads, not mobile ads.  It doesn’t appear that you can click on the link and go to the company’s Twitter account however, which makes sense from an ROI perspective.

One could also argue that showing the number of Twitter followers is much more valuable as an ad extension than Google’s own version of this type of social extension that displays the number of people who have circled the advertiser on Google+.

While the Bing Ads extension is in beta, there appears to be a huge number of advertisers utilizing it, however it could possibly be an automated feature.

Bing and Twitter recently signed a deal where Bing displays Twitter data, including tweets and accounts in their Bing search results, something Google hasn’t been able to do as effectively, namely because Bing has access to the Twitter “firehose” while Google no longer does.

Hat tip to Susan Waldes for spotting the change.

We finally have the first Google Quality Rater Guidelines update of 2022, and like usual, it is … END_OF_DOCUMENT_TOKEN_TO_BE_REPLACED