With marketers paying so much attention to the social media power of Twitter, there hasn’t been a close look at how well tweets by users on Twitter get indexed nor how much of an impact those tweets have on Google.

Google does not currently have data directly from Twitter (aka “the firehose”) to index tweets. Instead, they simply crawl it as they do any other website. But since they are crawling it, just how do they go about deciding which users to crawl and how much of their tweets to index?

Eric Enge from Stone Temple Consulting has a new study revealing just how likely it is tweets will get indexed by Google. And Enge discovered that indexation of those tweets was far lower than he expected before starting the test.

“Note that measured this 3 different ways,” said Enge. “Two of these use the site: query, which is a notoriously week source of data, but the 3rd method used a direct indexation test on over 19,000 tweets. The indexation rate was just poor no matter how we measured it.”

The first thing Enge found was that you needed to be a user with a high number of followers in order to get more tweets indexed. “The indexation skewed towards very high follower count profiles – those with more than 1 million followers,” said Enge.

They also found that not all tweets were indexed, even by high profile users.   “Even among the high authority accounts, indexation rate was slower than expected,” said Enge. Only those with more than 5 million followers had more than 50% of their tweets indexed. And if you had between 500k and 1 million followers, that index rate was a mere 10% of tweets.

Even indexing was slow. While many SEOs believe that Google crawls Twitter for discovery purposes, the data was showing it was too slow to be an effective tool for discovery. 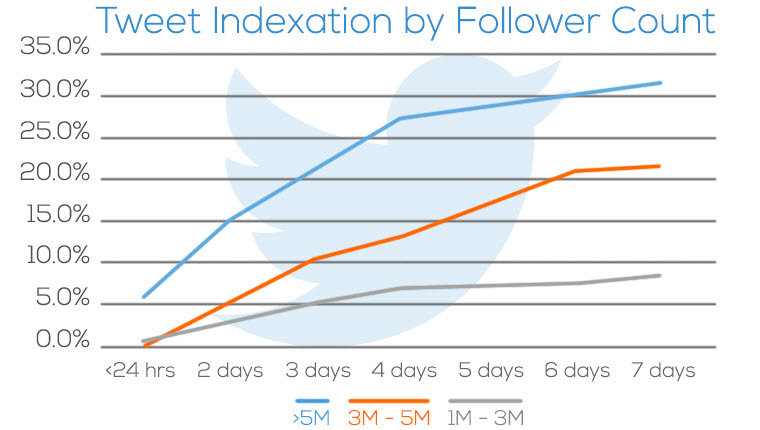 When I look at my personal Twitter account (@jenstar), I have 1,440 tweets indexed out of 6100+ tweets I have made since I joined in April 2007.   Even what is indexed varies. Sometimes it is the tweet, other times it picks up navigation on the page or even the promo information used to entice people to sign up for Twitter.

When looking at @TheSEMPost, this newer account only has 3 tweets indexed, and two of those are the profile page, one with https:// and the other without. The non secure URL also had a description of “A description for this result is not available because of this site’s robots.txt”

To search for how many tweets you have made that are indexed, simply use site:www.twitter.com/username/ However, the advanced date search doesn’t accurately display tweets by date.

So what does this mean for SEO value on Twitter? “To me, this argues that there is not much SEO value being seen in Twitter by Google,” said Enge. Twitter long ago made all links no follow (although some will remember the bio description URL loophole that remained for quite some time after all other links were made no follow), so there is no value directly from Google.

That said, SEOs shouldn’t discount Twitter simply because not many tweets get indexed, as the value goes far beyond that simply from traffic alone, not to mention others who might link to it from their own sites, with do follow links.

We finally have the first Google Quality Rater Guidelines update of 2022, and like usual, it is … END_OF_DOCUMENT_TOKEN_TO_BE_REPLACED