You are here: Home / Google / Is Google Penguin Finally About to Update? 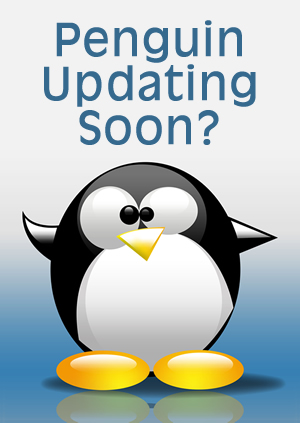 Could we finally be seeing a long awaited Penguin update, something that has been more than 10 months in the making?

Last month John Mueller revealed that the engineers were currently working on Penguin.  But there have been many more questions raised recently about just why we haven’t seen a Penguin update refresh yet.  But could we be seeing one finally?

Barry Schwartz seems to think that an update could be coming very soon – even this afternoon – based on the latest Webmaster Central office hours.  John Mueller was asked about the next Panda and Penguin updates and here is his response.

When can we expect the next Panda & Penguin updates?

At the moment we don’t have anything to announce.  I believe that Panda is one that is a lot more regular now so that’s probably happening fairly regularly.  Penguin is one I know that the engineers are working on and so it’s been quite a while now so I imagine its not going to be that far away, but it’s also not happening this morning.  Since we don’t pre-announce these kinds of things, it’s not something I can give any date on.

A Google update hitting on a Friday afternoon isn’t unheard of – after all, the last Penguin refresh we saw ten months ago was also unleashed on a Friday.  And with many tools monitoring search results showing some pretty big fluctuations, there is the possibility that the flux we have been seeing recently could be mini tests of a new Penguin algorithm update being tested.

Will it hit sometime in the next few days, or even today?  It is hard to say… but there are certainly many waiting for this update and the bad publicity it is starting to receive could be putting the pressure on the engineers to finish it.

Hopefully the added pressure doesn’t mean that the update hits a bit off the mark, especially when it comes to false positives (good sites inadvertently being hit by Penguin) and that it doesn’t allow the type of sites back in that it was meant to keep out of the search results.  Google does publicly say that they don’t mind waiting to release an algo until they are sure it is going to limit potential collateral damage.

For those who have been hit with a Penguin penalty and cleaned up, the date of the update won’t come soon enough.

Google has released a new version of the Google quality rater guidelines, a year after the last … END_OF_DOCUMENT_TOKEN_TO_BE_REPLACED