You are here: Home / Google / Is Google’s Relationship With The Webmaster Community Becoming Fractured? 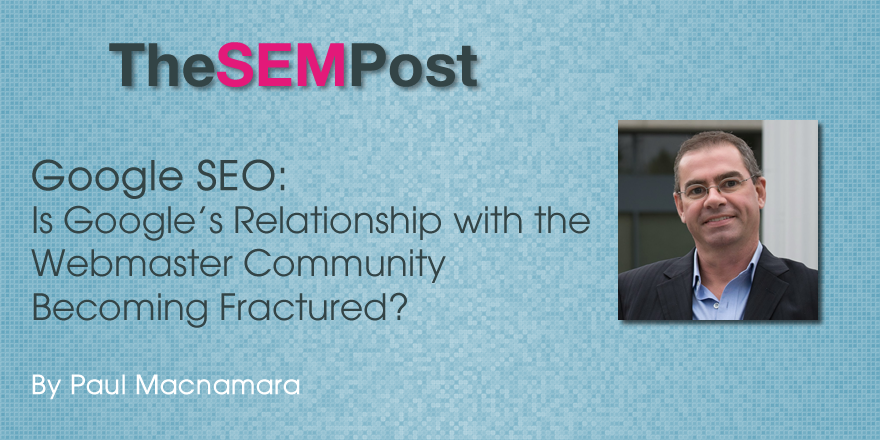 For those who follow the SEO community, there have been many changes this year with Google’s outreach to SEOs and webmasters, starting when Matt Cutts went on leave. While one could make the argument that Google’s effort at increased communication and transparency with webmasters has been sincere, many things have been botched so magnificently over the course of the past year or so that it is at the point where its relationship with the webmaster community is as tumultuous as it has ever been.

Last month, Google Capital backed service directory Thumbtack, was issued a manual penalty for unnatural links when their link building efforts were outed publicly. These type of manual actions typically require a very significant effort to get removed, and it is not at all unusual for weeks or even months to go by before a manual penalty is successfully removed. In the instance of Thumbtack, the penalty was revoked in less than a week, and the site seemed to return to historic ranking positions.

Many SEO’s cried foul, making assertions that Thumbtack received special treatment from Google as a result of its relationship with Google Capital. While Google denied providing any preferential treatment, there are very few in the SEO community that believe this to be the case. That disbelief from the community is likely partly the result of a pattern of misleading and false statements from Google over the course of the past year or so that have created an air of distrust.

Ever since the advent of punitive algorithmic penalties such as Penguin and Panda, Google has been consistently, and on a regular basis, making statements to the webmaster community that are just not factual, and as a result some of their credibility with the webmaster community seriously eroded. Quite frankly, it is impossible to trust at face value what Google says anymore.

Most recently, we had the “quality update,” also known as Phantom 2 that rolled out at the end of April. Many of us that work in the penalty recovery space noticed massive changes in traffic to sites that shared some of the same hallmarks that had impacted Panda victims previously. Google outright denied that any type of update had taken place. Just like we don’t need a weatherman to tell us that it’s raining, we also don’t need Google to confirm an update in order to to know when an update has occurred, so by denying the obvious, Google representatives look out of the loop at best, and deliberately misleading at worst.

Clean It Up And You Will Recover

A significant amount of the frustration is borne by misleading or false information related to both Penguin and Panda. Penguin and Panda are punitive algorithmic features in the sense that if a site that is affected, it is effectively put into a “timeout”, even if the site in question cleans up the issues that led to the penalty in the first place. Speaking about Penguin specifically, Google, through it’s representatives, have said that if you clean up the issues affecting a site, then the algorithm will no longer affect your site. We know that in many instances this is not the case. Those of us working in the recovery space all have examples of sites that have done very extensive, thorough cleanup, earned new links and have seen no improvement whatsoever in YEARS.

The problem here is that these are real people with real lives, real employees and real families. Google said that yes, even though you have been impacted by this algorithmic feature, you can recover.  Many business owners took that to heart and did everything they could based on that advice in order to recover their livelihoods. Some of these businesses have failed as a result.

Google had not updated Penguin since October of 2013 and thousands of sites were hoping to be finally let out of jail when Google released Penguin 3.0 on October 17th of 2014. Despite this being one of the most anticipated updates in the history of the engine, Google stumbled around in it’s communications with webmasters leading to massive confusion in the webmaster community.

First, it said that it had fully rolled out in a day. When it became clear that this wasn’t going to be an update at all, but rather just a minor refresh, there came this incredulous statement from Pierre Far of Google who said that it would take a few weeks to roll out and that:

“This refresh helps sites that have already cleaned up the webspam signals discovered in the previous Penguin iteration”.

That is a laughable statement. Yes, there were some recoveries, but they were few and far between. Then, in December, they said that Penguin 3.0 was still rolling out and that it was going real time. How Google could botch communication so spectacularly during the most anticipated update in its history is remarkable.

Penguin is a crushing punitive algorithmic feature that has destroyed thousands of businesses, partly as a result of these businesses believing that there was a way to fix the problem. To do all of the work and then wait patiently for Penguin to update, only to see Google treat them as an afterthought dismayed many.

Panda is the next biggest gong show. At one point, it was believed that Google was running this page quality based algorithm on a near monthly basis with regular “tremors” happening in between. Sites that were impacted could clean up quality issues, and if they were thorough enough, they had a reasonable expectation of a quick recovery. All of that stopped in October of 2014, and although Phantom2 looked like it might be Panda based, we have not seen a Panda refresh since then. Again, Google have been giving misleading and conflicting statements about Panda leading to confusion and frustration from businesses that are suffering, even though they have committed resources to improving their sites.

The Panda messaging mess has continued with Gary Illyes saying on June 2nd at SMX Advanced that Panda would refresh between “two to four weeks.” That statement was met with a collective eye roll from the SEO community and was anyone even slightly surprised when that timeline came and went with no Panda refresh?

From the flippant remarks on things such as click data not affecting scoring to the HTTPS push for what seems like a nonexistent ranking benefit, Google’s consistent misleading statements are becoming a joke for some.

Would They Be Better off Saying Nothing?

It seems as though messaging has become fractured and inconsistent since Matt Cutts took leave. As A.J Kohn so eloquently said in his recent post, both John Mueller and Gary Illyes are excellent ambassadors for Google, but it is highly unlikely that they had the type of pull internally that Matt Cutts had. You can make the argument that this attempt at “being more open” with webmasters is doing more harm than good and that until such time as they come up with a coherent messaging strategy, they should rethink their approach.

Some of the best advice I received when I first entered this industry was that sometimes it is best to just say nothing. Would Google be well served by doing the same?  Or are the somewhat misleading comments better than silence?

Owner at Paul Macnamara Consulting
Paul Macnamara has been working in search since 2000 when he started his career in e-commerce. He has spent the past 15 years immersed in search engine marketing and now offers SEO consulting services at paulmacnamara.com. You can follow Paul on Twitter @therealpmac

Google has released a new version of the Google quality rater guidelines, a year after the last … END_OF_DOCUMENT_TOKEN_TO_BE_REPLACED