You are here: Home / Google / Thumbtack is Back in Google But Link Problems Went Beyond Badges 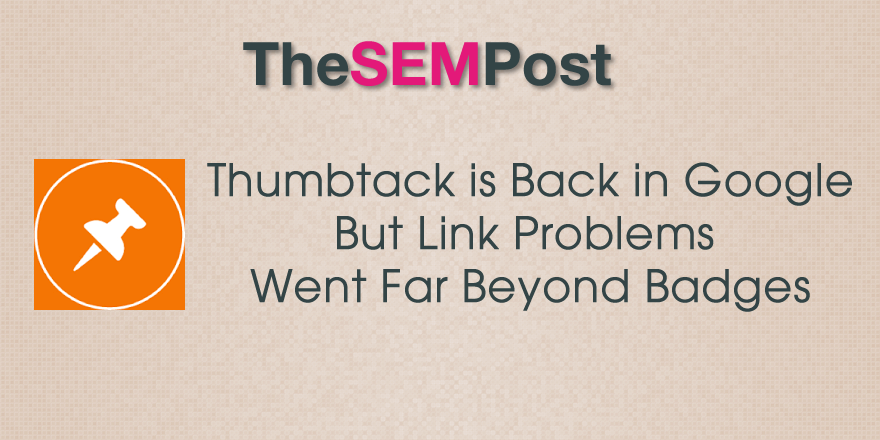 Thumbtack, the site that was penalized by Google for “selling” links is now back in the Google index after a week in the penalty box.  And while a week being penalized is definitely on the short side, it isn’t unheard of.

However, it turns out there was a lot more going on with Thumbtack’s link issue, and it might be the reason they seemingly got their penalty lifted in such a short period.

Back in Google’s Good Graces

It took about a week, but Thumbtack cleaned up their backlinks enough to start ranking for their keywords once again.  They began to appear back in the Google search results late Friday afternoon, and the following morning sent a notice letting their customer base know they were back in Google.

When I first looked at the links, it was obvious there was a pattern where Thumbtack was soliciting anchor text rich backlinks in exchange for “points” that could be used on their site by businesses.  However, once you start looking a bit deeper, it looks a bit more complicated.

When analyzing their backlinks in Majestic, I went to check how many backlinks they managed to get removed before the penalty was lifted.  There had been some significant and noticeable cleanup being done over the previous week.

But when you look at this screenshot, something else quickly becomes apparent…. they had been cleaning up other backlinks well before they were penalized a week and a half ago – and most notably – cleaning up these links while soliciting more links via their badge program.

On May 21st, Majestic recorded a loss of over 10,000 backlinks.  A few days earlier, on May 18th, they lost over 8,000 backlinks.  That is definitely indicative of someone doing link cleanup, especially when there were nominal backlink losses in the previous two months.

Knowing that they were already in the process of cleaning up back links, it meant they already had someone either in-house or a consultant working for them, who was getting links removed and likely disavowing others.  So the fact they were able to have the penalty lifted in only a week isn’t as surprising as it initially sounded… there was already ongoing work on removing links being done.

It also means the penalty itself may not have been directly targeting their links for points scheme after all – although it is still definitely against the Google quality guidelines – but it definitely was what brought Google’s attention to Thumbtack.  And it was what likely brought attention to their other, much worse link issues.

Because Google invested in this company, many people were watching with eagle eyes to see what kind of clean up the company did.  But it is the badge links that people are looking at when judging if there was enough “clean up” done, while not noticing the non-badge links.

What About During the Penalty Week?

During the week they were penalized, according to Majestic data, they lost almost 52,000 backlinks, so there was definitely an effort on Thumbtack’s part to send out link removal emails – and actually see the links removed. And with the delay in Majestic crawling, there could also be more links removed that just haven’t been recrawled as of yet.

Many people have been tracking badges to see what are being removed, but again, I think we need to look at the bigger picture of not just those links, but all the bad ones previous to the badge links being removed.

How Many Links Were They Gaining?

Again, we have this chart from Majestic to show their backlink gains, for the links Majestic discovers as new each day from mid-March to the present.

You can see some spikes happening, like the 183,000 links discovered on April 9, 2015.  This kind of profile often raises red flags unless there is a definitive reason for it, such as major press coverage.

What About Overall Backlinks

They also saw major gains in overall links starting in March when they skyrocketed from a tiny amount of links to their current 4+ million.

You can also see from this Majestic chart that they were doing some pretty heavy backlink building before they began actively soliciting for the badges.

Thumbtack was also offering between 10-30 credits for those who would write an article or blog post about Thumbtack as well.  So not only were they soliciting links from badges – something that would be easier to spot – they were also soliciting blog posts too.

So not only do you have what seem to be paid links and badges, there are also those who put up articles or blog posts on any number of sites with links to Thumbtack, all for getting more free credits.

Thumbtack did seem to be sending notices to everyone they awarded points to, at least for the badge points, although it isn’t known if people were also sent them for articles and blog posts.

We have multiple reports from business owners who received link removal notices from Thumbtack, so they were definitely making the effort to see them getting removed.  And Google does like to see that webmasters are actively trying to get links removed when they process a reconsideration request.

Thumbtack was in a pretty unique position though to get many link removals done quickly.  Since many of these businesses rely on Thumbtack for leads, they want to stay in their good graces and remove the links.  They wouldn’t be faced with much in the way of ignored emails or requests for payment for removal like most webmasters are.

The other thing we don’t know is whether they submitted a disavow file or not.  It isn’t unheard of for a company who is faced with a major penalty for links to disavow everything that could be seen as a bad backlink early on, and then do the detailed link audit to begin whittling down the disavow file as they identify more good links to remove off of it.  The feeling is that some traffic with reduced rankings from a huge loss of links is better than a full on penalty with no traffic at all.

But it seems more likely that they might have disavowed the really spammy links – the types of links they were already working on removing – and pinned their remaining hopes on cooperative business owners removing them in good faith.

But since they do have some rankings – it is not clear yet if they have gotten them all back or not – a total disavow situation seems unlikely, although it is very likely a smaller disavow with the spammiest ones was done.

One likely scenario is that as they were cleaning up these links, they lost traffic and were looking at how to make up those links.  While it appears they had been using those badges for some time, it seems they started a push to have their listings use them recently.

Here is their Searchmetrics report, and it definitely shows them taking a bit of a drop in visibility in May, which coincides with their previous link cleanup campaign.

It is definitely a possibility that they came up with this link badges for points scheme in order to compensate for those lost links by using a seemingly easy way to earn links.  However, their new method was also against the Google quality guidelines, and it was what ultimately brought attention to their site.

Was it all them?

However, the majority of the links were not leading to specific profile pages.

Surprisingly, Thumbtack is still soliciting links from business owners.  But the other interesting thing to note is that the request page is dated April 15th, 2015, which I suspect coincides closely with when they realized they had a backlink problem, and decided to promote this a bit more to get what they perceived to be better quality backlinks.  Click to view full image. 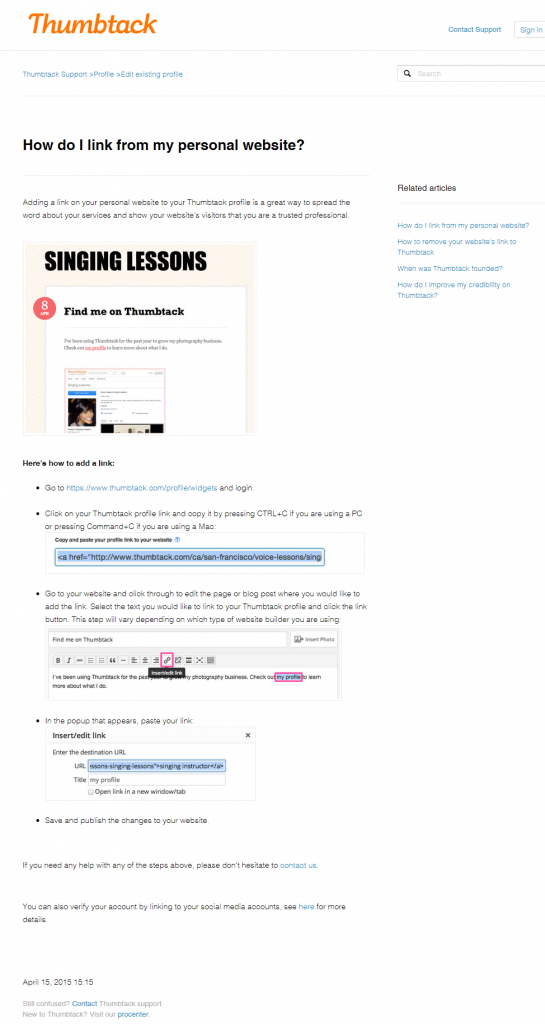 However, on Thursday they also added this article detailing how to remove the badges that customers have previously placed on their site.

Where are they now

While they do seem to rank for some pretty long tail keywords, their Searchmetrics shows that while they did get some search visibility back, it is pretty tiny compared to where it was before.

Clearly there was some link removals and disavows done within the week, since their rankings are not as strong as they were previously.

So while Thumbtack was able to get off Google’s naughty list within a week of being penalized, it is obvious there was a lot more to this case than mere link badges.

And yes, a week is pretty quick for a reconsideration request to be granted, they had the advantage that they were already cleaning up their links, which means they were working with someone who did have an idea of what they were doing.

We finally have the first Google Quality Rater Guidelines update of 2022, and like usual, it is … END_OF_DOCUMENT_TOKEN_TO_BE_REPLACED