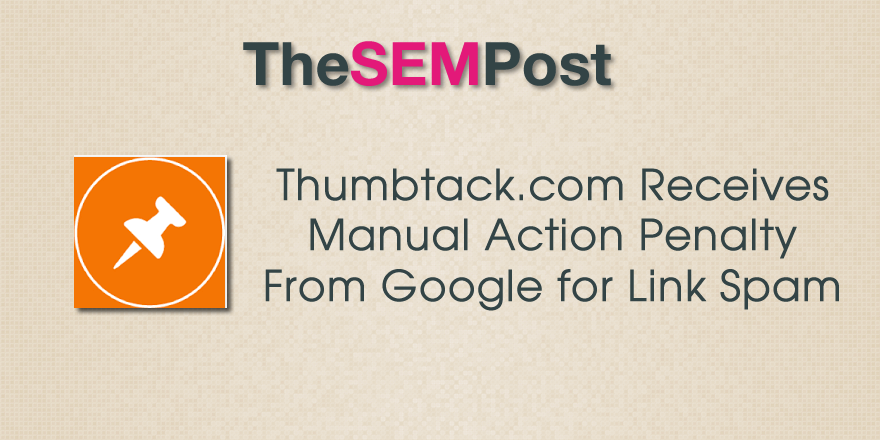 If you do a search for “Thumbtack”, you will not find them anywhere in the Google search results… nor will you see them for any of the estimated 25,000 keywords they were previously ranking for.  They have been hit with a manual action penalty courtesy of Google.

Thumbtack does not rank for their own brand name, which is usually the first sign to SEOs that something in their SEO has gone awry. 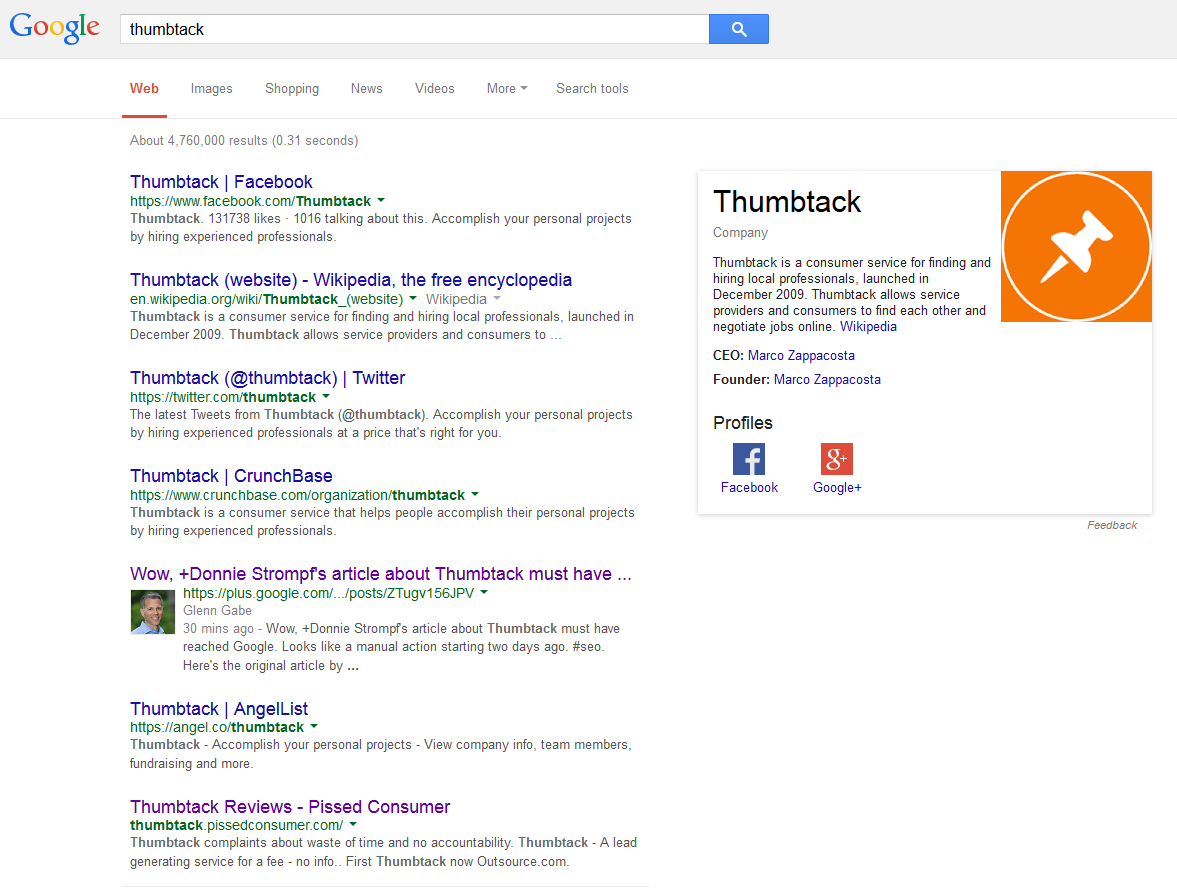 Loss of Traffic and Rankings

And SEMRush shows a definite drop in traffic starting this weekend.

They also show a loss of 25% of their rankings. However, this loss percentage will likely get much worse in the coming days.

Last week, attention was brought to Thumbtack’s questionable link building tactics.  Donnie Strompf (@donniestrompf) received a link request from Thumbtack with some pretty hefty anchor text for a client of his.

“While removing a link penalty for a client’s site, I discovered Thumbtack’s improper ranking methods,” says Strompf, on seeing the link spam issue.

The email received promised 30 points for including a profile link, placed in the following manner.

1. Copy and paste your profile link to your website with a description of your profile
<a href=”https://www.thumbtack.com/mo/kansas-city/personal-injury-lawyers/“>legal</a>
If you would prefer to add a button or a badge instead of a link, you get one here.

2. Once you are done, respond to this email with the URL of the link, badge, or button.
I’ll verify the link and will credit the points and badge to your profile.

Obviously, even though money isn’t explicitly exchanging hands, this is a violation of Google’s webmaster guidelines.

In fact, they specifically state that money doesn’t have to be exchanged in order for it to be considered a “link scheme” in the eyes of Google.

From the Link Schemes section of the Quality Guidelines.

The following are examples of link schemes which can negatively impact a site’s ranking in search results:

Buying or selling links that pass PageRank. This includes exchanging money for links, or posts that contain links; exchanging goods or services for links; or sending someone a “free” product in exchange for them writing about it and including a link

They also include specifics about widgets as well, which badges would fall under as well.

Keyword-rich, hidden or low-quality links embedded in widgets that are distributed across various sites, for example:
Visitors to this page: 1,472
car insurance

As early as last summer, some were raising questions about Thumbtack’s link building practices on the Moz forums.

We have a business registered on Thumbtack so we receive their newsletters. I’m aware that review sites offering a “badge” or verification logo which links back to your profile is nothing new. But the email I received from Thumbtack is a fairly blatant attempt to game Google for popular keywords.

I was just curious on your thoughts about this. I believe it was Overstock who did something like this and got slapped by Google pretty hard for a while. Could Thumbtack be heading down the same path?

The original poster also shared a link to the request, which is similar to the one Strompf was sent.

But the co-founder and director of marketing, Sander Daniels, saw nothing wrong with building links this way.  He argued on Twitter that they weren’t paid links because they were in exchange for points and not cash, stating “not buying links, points have nothing to do w/ $$”.

@garthobrien not buying links, points have nothing to do w/ $$

What was notable about this exchange was that the person who initially tweeted it did not tag either Thumbtack or Daniels into the original tweet, but he tweeted a response to it anyways, before the penalty was discovered.

But despite Daniels assurances that they were not “buying links”, both the quality guidelines, and the Google manual action penalty, show otherwise.

“Resolving the Issue and Misunderstanding”

Others have also been pointing out to Thumbtack on Twitter that they had vanished from the search results, starting yesterday.

@ThepuncherG This is due to a site issue. We're aware of the situation and are working hard towards a solution as quickly as possible. ^VG

And again they are claiming they are working on resolving the “issue and misunderstanding.”

@nichesiteazon @ThepuncherG Credits are different and separate from points. We're working on resolving the issue and misunderstanding. ^ST

@DavidRFrank We're currently working with Google on the issue. We're hoping to have the misunderstanding resolved soon. ^CW

Now, once you start looking at their backlink profile, it is clear this is link spam, and nothing to do with a mere “misunderstanding.”  Looking at the anchor text in Majestic, it is clear there is a spam issue once you get beyond the first handful that are related to the brand name.  It then becomes a list of keyword spam. 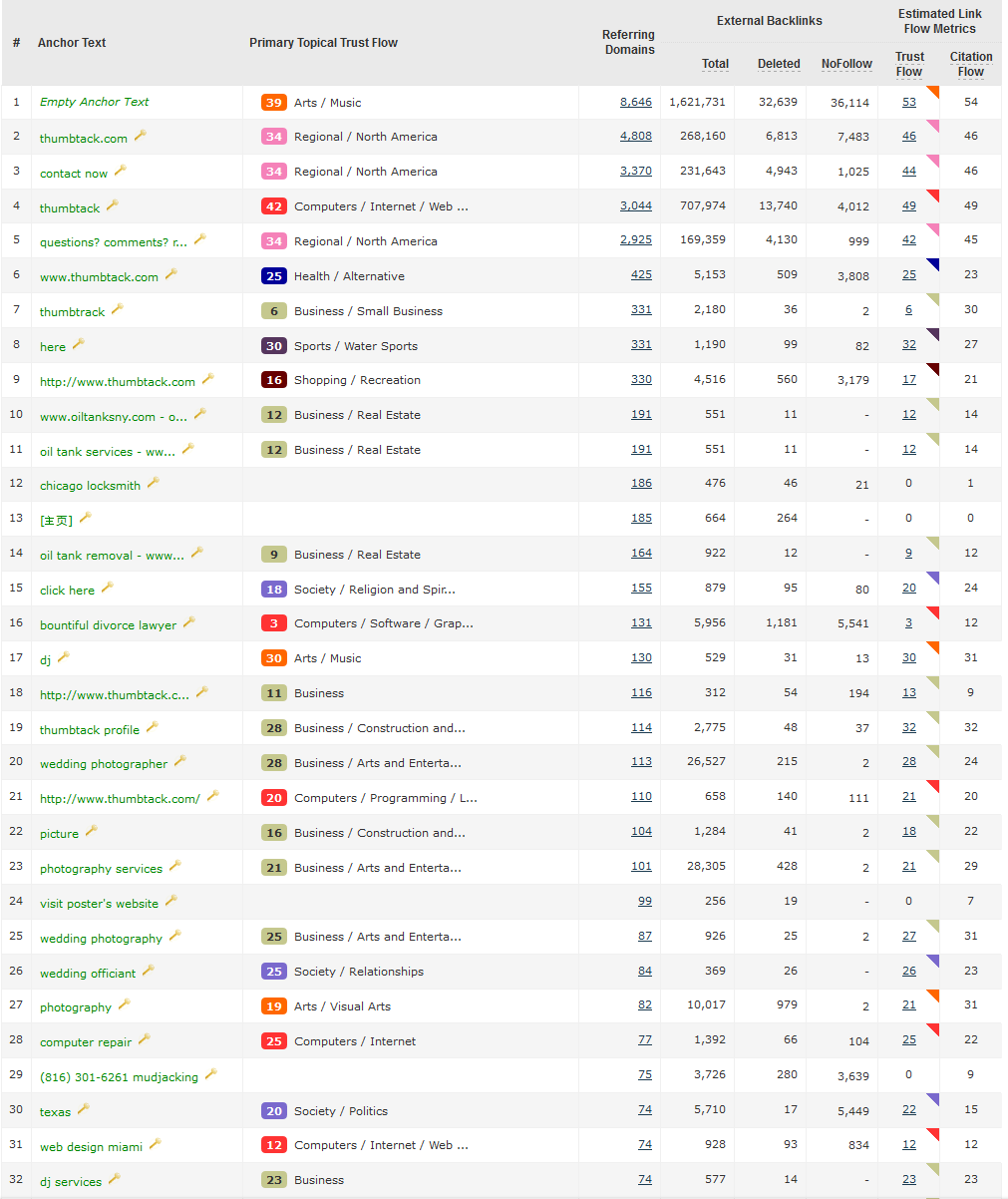 It becomes a list of anchor text, including some competitive search terms, for terms such as wedding photography, web design, DJ services, oil tank removal and Chicago locksmith.

One of the examples in the original article shows up in a variation in Majestic for “legal services.”  As you can see, there are 18 referring domains who linked to Thumbtack in this fashion, almost all with extremely low Trust Flow and Citation Flow. 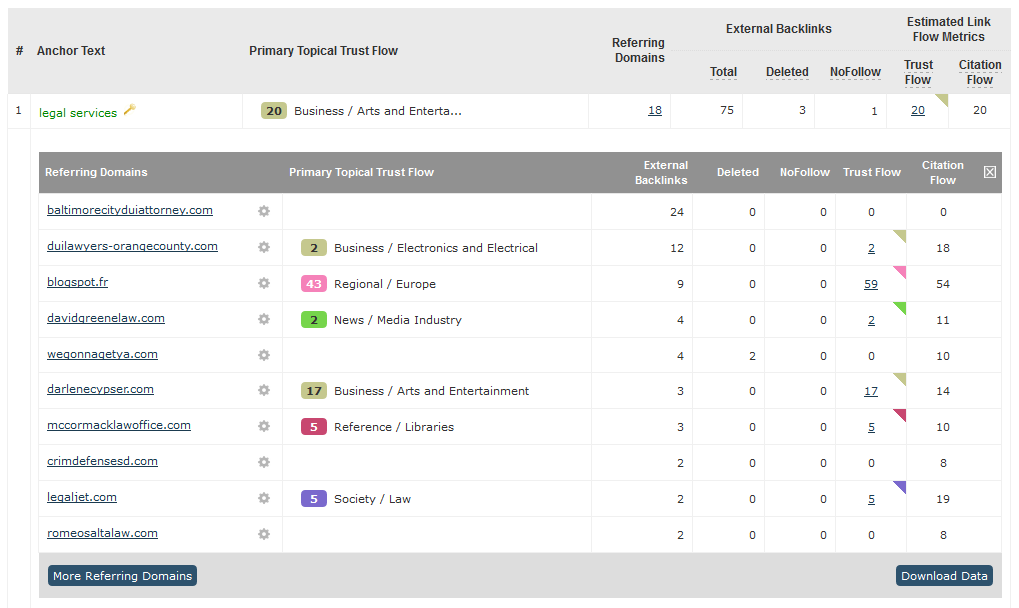 What many people are thinking about with Thumbtack’s link building practices is the fact it received funding from Google Capitol, in its last round of funding last summer.  Last week some were speculating whether this could have been why Google was letting this site slide with its spammy link building tactics.

Strompf also made the connection to Google.  “Looking further, I then discovered that Google was the company’s largest investor,” says Strompf. “Although Google seems to already taken some action against Thumbtack, will they penalize them like they did everyone else?”

Google does seem to have penalized them like they would anyone else when you look at it.  It has the classic signs of a manual action penalty, such as the loss of a huge number of keywords and the telltale sign where they don’t rank for even their own brand name.  So the fact it has manual action against it seems to show that Google is treating this site like any other who is caught in violation Google’s guidelines.

With Thumbtack in denial that they did anything wrong, which isn’t that unusual for a webmaster caught for doing something against the quality guidelines, it will be interesting to watch and see just how quickly Thumbtack moves to clean up the link spam on their customer’s sites.  They could either bite the bullet, dive in and start removing and disavowing links, or they could try and submit a reconsideration request without the cleanup and hope for the best.

Others have asked for further details from Thumbtack, but they have stopped responding to questions.

Are They Really Working with Google?

I couldn’t find a thread in Google Webmaster Help forums to determine if that was where they were “working with Google” or if they were messaging someone from Google on Google+, as webmasters will sometimes ping John Mueller there.  They could also consider “working with Google” as merely being the submission of a reconsideration request.

But it seems unlikely they would have access to someone in search through the Google Capital investment end, as Google tends to keep their various departments pretty separated.

They have ramped up their paid ads campaign through AdWords, but again, Google keeps the ads side pretty separated from the search side, so they would not be able to appeal through AdWords regardless of how much money they put into it.

I am sure people will be watching to see Thumbtack’s next move, when they start ranking for their name and other search terms again, and if any visible clean up was done.  I am sure many will be disappointed if it seems they can reverse the manual action penalty by appealing through a reconsideration request.  Everyone except Thumbtack themselves seems confident that this as a clear-cut case of link spam.

I will continue to update with any news or announcements.

Google has released a new version of the Google quality rater guidelines, a year after the last … END_OF_DOCUMENT_TOKEN_TO_BE_REPLACED