You are here: Home / Google / Penguin 3.0: Is it an Update or Merely a Refresh? Google’s Response 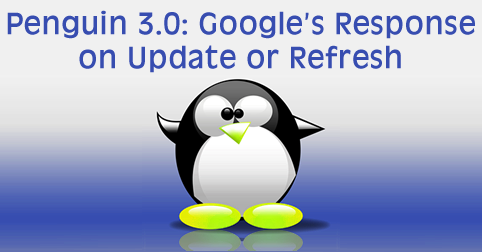 When Penguin began rolling out Friday night, we all assumed this was the long awaited Penguin update.  After all, with over a year to work on it, many assumed it was a new groundbreaking Penguin that would leave the old one in the dust in terms of spam fighting.  So while a year is a long time to wait – especially for those waiting in Penguin purgatory after being penalized in an earlier Penguin – people could see it was understandable.

Then Pierre Far posted about Penguin rolling out, yet called it both an update (in the title) and a refresh (in the body of the post).  And particularly since this rollout is ongoing for weeks, and the US rollout was later, it has been hard to tell which it actually is – a refresh or an update.

I asked Google for specifics about whether this was an update or a refresh, since there is so much confusion.  A Google spokesperson responded with “We’re not specifying further — as always, our guidance is to focus on good high-quality content.”

According to Marie Haynes, John Mueller hinted in a recent Webmaster Office Hours that this is a refresh and we won’t see a true update for a few months due to the holiday season.

John Mueller hinted in a hangout yesterday that it will take a few more months before an update happens.  He said, “The holiday season is coming soon and I don’t think we want to cause too much fuss there.”  So, look for an update perhaps in the new year.

As I also noted yesterday, the impact is also more inline with a refresh (affecting 1% of US search queries) as updates tend to impact more search queries (in the neighborhood of 2-3%).

The naming also comes into question.  This Penguin is widely known as Penguin 3.0 as everyone assumed that a year long delay would certainly mean it was an update and not a refresh, but technically speaking it would appear this is actually Penguin 2.2.

Why does it matter whether it is a refresh or an update?  A refresh is merely a refresh of the previous algorithm, meaning the identical signals and factors that were used in the last Penguin as were used in this one.  It will unpenalize those who have cleaned up since the last one went and catch new sites and penalize them.  An update, on the other hand, will include changes to the algorithm with some new signals and factors added while others are removed – essentially a new build of the Penguin algo.

It also raises the question that if this is merely a refresh, why wasn’t it refreshed much sooner?  I suspect that perhaps the next Penguin update is in the works – and we know it was being worked on as far back as July but very likely a lot earlier than that, but it was taking a lot longer to do and was still not ready to be unleashed on the wild, so they decided to do a Penguin refresh as a stop gap measure.

Google has released a new version of the Google quality rater guidelines, a year after the last … END_OF_DOCUMENT_TOKEN_TO_BE_REPLACED